The heat brings the critters. Scorpions, spiders, roaches, ants, mosquitoes. Here the scorpions are not that big... 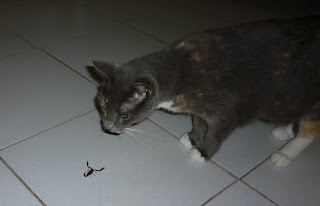 But they are still ugly.

It's been a while since I've seen one of those jumping wolf spiders inside the house, but this evening there was one under my shoe outside the front door.

Roaches fly - there are plant roaches and then the other kind. I've learned not to yawn with an open mouth while riding around on the golf cart during the evenings - don't want to eat one of those! Being beaned in the forehead by an insect going in the opposite direction actually hurts - probably hurts the bug more than me though.

Ants - ahrrrggghhh!!! Big black ants are eating our pool cupboard doors. Normal black ants are falling into the pool. Tiny sugar ants pounce on the tiniest crumb left on the counter, and I don't know how they did this but they got into an unopened bag of icing sugar. The bag still holds air so I know it's sealed, but inside I can see the little devils. Here's a tip: keep anything sweet in the fridge or freezer, and immediately wipe counters. Sugar ants even love little puddles of water, like the sweat that pools under a glass. I wipe them up, I pound them with my fist - there is a never-ending supply of sugar ants at this time of year.

Mosquitoes - after the rain we had a couple of weeks ago, the mosquitoes have made it very hard to take Loco out during dusk. Thankfully they are not bothering us while sleeping, but some nights I've gone to bed wearing repellent perfume because one has invaded the room and I'm allergic to their bites. We had some guests who left behind a nebulizer of mosquito juice, and it really works. I forgot to look for it when we were in Canada, but I have another trip coming up so will have to see if I can get a refill. I also need Solarcaine - the after-bite lotion that takes the itch out - forgot to pick some of that up too (I did have a list, I forgot to check the list while we were there).

One insect that really doesn't bother us here at home but does bother us at some restaurants is the house fly. We have screens on windows and doors, and even though some of the screens have some holes from sharp cat claws swatting at a stray cat through the screen, the flies don't get in.

We have 4 cats in the house. Some mornings we come downstairs and find insect body parts - legs, heads, or even an entire insect that was slaughtered but determined not to be tasty. The other day there was the top half of a gecko on the stairs. Our cats are earning their keep, taking care of invaders while we sleep. I wish they could be trained to go after sugar ants.
Posted by Sue at 10:22 PM

Wait! Your previous report was "part 1" but where is part 2,3,4? And you traveled all the way to Canada and didn't take any photos of Kyle? Que lastima!

I bought a bag of carmel type suckers at Mirtitas and left the unopened bag out. (I normally use the microwave as a vault.) They somehow got inside the unopened bag. Tiny transparent looking ants. Freaky! Last summer the mosquitos in our neighborhood were mercilous. I couldn't even open the garage door without getting swarmed. I went through 2 bottles of bugspray where normally we would never use any here in Phoenix! There were a lot of cases of West Nile virus here in the Valley, so I now arm myself.

I agreed with drgeo. I was waiting for Part 2.

I would be screaming every minute .. how I hate bugs! Keep up the good work precious cats!

Cats really earn their keep with bugs. I suppose you know they are really good at killing scorpions, that amazed me. They are faster and they seem to have an innate understanding of what to do. Dogs now, they just get their noses bit and whine a lot.

I'm convinced that nothing I could stand to have around kills ants. It's unfortunate that the geckos ignore them too. I understand though, I get a huge welt from their bites.

Solarcaine should be easy to find in Cancun, I've seen it in Playa. I'm interested in this nebulizer of mosquito juice - what is that?

Sue, as I read about scorpions I thought of the scorpion when you first bought your house! LOL!

drgeo and karen - there will only be one more part (part 2 - family). Nobody said I had to do them in sequence...lol. And drgeo, yes, I took photos of Kyle - guess you're not on Facebook with me, I post a lot of stuff there, which is why this blog has suffered from neglect lately.

Beck - I use the microwave as my ant-free space too, usually it works.

K - I hate bugs too, but when you live here, you learn a certain level of tolerance. Otherwise, you will go nuts. It's not that our house is crawling with these bugs every day (well, the sugar ants - yes), but you just always have to be prepared, you never know.

Jan - I remember that HUGE scorpion, I think it's the biggest I've ever seen here, actually. At the time it looked like a steam shovel coming at me - I'd never seen one before...lol.

Jonna - our cats always leave dead scorpions so I guess they must be good at it, but once in a while they show up with something on their head or shoulder area that might be a sting, so I bet they get stung now and then but it doesn't stop them. The ants - at least the black ones are outside, it's just the sugar ones that are inside, but just at this time of year. In fact, I just about drank them, they quickly got into my coffee mug this evening (we are drinking flavored coffee and I think the odor attracts them). This mosquito stuff (mosqui go) comes from the UK (our guests were from England)...here's a link: http://www.purpleturtle.co.uk/acatalog/Design_Go_Mosqui-Go_Duo_-_USA_Plug.html - you can buy it online though so I'll order refills and maybe another couple units for other rooms in the house. It is really effective - I don't use it every night, and I don't use it all night long.