Loco's #1 passion is to go with us on the golf cart; he loves it  more than food. And although he hates water, he doesn't care if it's raining, he still wants to go with us. On Monday and Tuesday it was almost impossible for us to get out to take care of business due to very heavy rain, so we made Loco stay home for most of our trips.

But yesterday, he was not to be denied, he was sitting by the gate patiently waiting for us to get organized and get out on the road. By 9 we left the house, leaving Loco home as we planned to run some quick errands and he would have been in the way. He was not pleased, he tried everything to go with us, including hiding in the garden instead of coming when called. But in the end we had our way and Loco was left behind.

At 11:30 we were picking up laundry when Cablemas called to say they were headed to one of the three houses we'd reported with internet issues. We stopped at the house to pick up the laptop and Miguel wanted to take Loco too. Happy dog!

As we were approaching the first house, we saw the Cablemas truck pulling away - we'd taken too long to get there and they weren't waiting any longer. I tied Loco to the back terrace, making sure he couldn't reach the ledge of the patio and jump off, as he did once before (lucky he didn't hang himself). While we did some things around the house, waiting for Cablemas, Loco sat and watched the lizards playing in the beach plants. Eventually I moved him to the front of the house and attached him to a concrete block so he couldn't run off. He loved that view - the iguanas were right across the street and there was a nice patch of sun on the sidewalk for Loco to bask in.

Finally Cablemas came back, fixed the internet, and we all packed up and headed to the second house.

Loco loves the second house because there is a lizard living somewhere in the house. I suspect it might be in the maid's closet because Loco spent most of his time sniffing under the door. When he got tired of that he stood at the front door and watched the gardens, patiently hoping for a lizard to run around. We were at that house for a good hour trying to get the internet going, but Loco didn't mind.

Finally off to the third house where Loco sat tied to the golf cart. This was a short visit because the internet issue turned out to be a downed cable - nothing the technician could do except report it to the office.

Off to La Bruja for lunch/dinner. Loco has spent hours sitting on the golf cart at La Bruja, he is so patient - maybe because he knows he will usually get a piece of chicken when we are done. Yesterday a child was trying to fly a kite, and that caused Loco some stress as the kite hit the golf cart and he didn't like it. During our meal we got a call that the check-in at another property needed something, so we gobbled down our meal and decided to go straight to the condo rather than drop Loco off at home. We were probably a good half hour at the condo, leaving Loco on the golf cart, where he made himself comfortable on the front seat.

Finally it was time to head home - 4:30 pm. All day on the road for us, and 5 hrs for Loco. Miguel wasted no time flaking out on the bed. I fed the animals and joined Miguel - we both went right to sleep, with Loco resting in his usual place - under the bed.

At 6 we dragged ourselves out of bed to make our final rounds for the evening. I didn't think Loco would be interested but he was right at the door as soon as he heard the jingle of my purse keys. When we finally got home for the night, Loco was done - he flaked out for the rest of the evening. 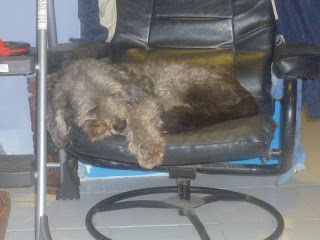 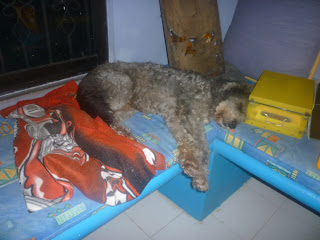 This morning, guess who was raring to go again?
Posted by Sue at 11:13 PM

That Loco! He is just so adorable! Hope to see that little fella sometime soon!

What a busy day! Glad you have plenty of Loco supervision.

It's so easy to make dogs happy, they just want to be with you. I wish we were as easy to satisfy.

He's a cute dog, I love that terrier look.

What a trooper. I hope he got lots of treats for being good!