Each of our pets has at least one quirky behavior. Loco with his passion for riding on his golf cart. Minina with her escape routines.

Now we've discovered yet another weird behavior. One of our cats apparently loves vine-ripened tomatoes.

Miguel has been growing tomatoes out in the small patch in front of the house. Finally three tomatoes were ripe enough and we picked them. I put them in the vegetable container in the kitchen, anticipating the delicious salad we would have the next day. 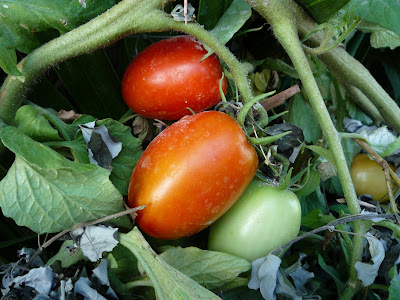 Later that evening Miguel called me into the kitchen. On the floor was one of our tomatoes, half-eaten.

Which cat did it? We couldn't decide. Luna, who knows how to survive in the jungle and probably had to eat fruit from the plants there? Or Minina, who loves mango? Or Maya?

We called the cats into the kitchen to see if they might give us a clue.

Maya sniffed at the tomato and then walked away. Luna wouldn't even come into the kitchen. Minina strolled right by the tomato without even a second glance.

We decided it was Minina, since she did not seem surprised that the tomato was there on the floor and she didn't even bother to check it out. We figured she knew it was there because that's where she ate it. Since she likes mango, maybe she decided to try tomatoes. But why now? We always have tomatoes in the kitchen, and nobody has shown the least interest until now.

The bandido picked the ripest and tastiest tomato. We hid the other two tomatoes in case they suddenly generated interest as well.

Later that evening Maya was racing around the house and driving everyone crazy with her hyperactive playfulness. Maybe it was her that ate the tomato afterall and something in it triggered a burst of energy?

I thought we'd never know the answer, but yesterday I left a large beefsteak tomato on the counter. It came from a package I bought in Cancun, and I didn't really like the texture and wasn't sure what I was going to do with it. One of the cats made the decision for me.

Miguel called me into the kitchen. We tiptoed in and there on the floor was Maya with that large tomato. Chomping away at it and licking the juices from the inside and not paying the least attention to us. 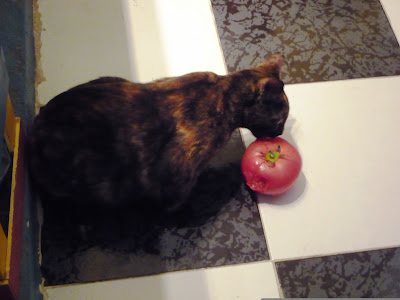 She tried to pick it up but it was far too big and heavy for her to move it much. After taking pictures, we tossed both Maya and the tomato out on the back terrace, where Maya continued her assault. In the end, she ate almost half of the tomato. And never got sick.

I wonder what is in the tomato that makes it appealing? And why now and not before? The only common element between the two tomatoes was the green stem; the tomatoes we usually buy do not have a stem.

I once had a cat who ate tomatoes, but she outgrew it when she reached adulthood. Perhaps Maya is just experimenting? (she's still only 6 months old).

Whatever...The case of the tomato bandido is now solved.
Posted by Sue at 10:22 AM

Now you know your vulnerabilities. I had a cat once, a black cat, who like green stuffed olives. She'd roll them around, play, bite and then, finally, eat them! Too cute,a tomato bandito with discerning tastes no less.

I suspect little Maya will have many more quirks for you to discover. I do think that the timing has to do with the smell of the stem. Someone said recently that they didn't like fresh tomatoes because the smell reminded her of tomato plants. I think it was part of a Pico discussion on Chris' board.

Sue your animals certainly keep you on your toes. Too funny you caught her and got a picture to prove it.

How funny! We used to have a tomato patch in Kansas City and the squirrels ate them. Maybe Maya's a little squirrelly! Ha!

Glad you know who to keep an eye on when you bring in the tomatoes. I can't remember whether we told you, but I had picked 4 of the little cherry tomatoes from the terrace and left them on the counter top. Next morning, I found one half-eaten tomatoe, another whole one on the floor, and never did find the other 2....So Little Miss Maya was the likely bandido(a?) then, too...

To all: Maya has continued to steal tomatoes, and one day she took a mango (not sure if she meant to or not, she only bit into it, she didn't eat it). Our tomatoes are now in hiding.

And Beck, Maya does sit up like a prairie dog, so maybe?