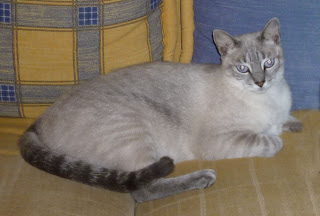 Minina, Maya, and Smokey are indoor cats - only allowed out on the back terrace. They spend the day and evening out there, and come in at night in order to sleep.

Luna is an indoor/outdoor cat. She sleeps on the back terrace at night, goes out to the bathroom in the morning, and then usually spends the day inside sleeping.

Cappuchina, until recently, was a strictly outdoor cat, sleeping on the front terrace day and night, and accompanying us with the dogs when we took the dogs down the road for bathroom breaks.

First thing in the morning we open the back door to the terrace and out goes Minina with great enthusiasm. Smokey is usually eager to go out too. Maya - no, she likes to stay in and follow us around and supervise everything we're doing. We're starting to call her Granny. It takes an hour or so to catch Maya off-guard in order to pick her up (ummph, she's heavy) and toss her out.

Luna, previously the queen of the cat pack, is scared of Cappuchina. Cappuchina knows this and will sometimes deliberately follow Luna outside, and occasionally she will even back Luna into a corner. Thus, Luna panics when Cappuchina is around, even when she doesn't have any intention of bothering Luna. Luna growls and then lets loose with a series of cat yowls, even if Cappuchina hasn't touched her. We are starting to call Luna "Kim", after my sister. My Grandmother used to say that Kim would never get kidnapped because if anyone tried to grab her, all she'd have to do would be to open her mouth and anyone would be scared off in a big hurry. Luna has the same ideas as Kim had.

Luna was not the only cat who had a problem with Cappuchina. Minina was very aggressive towards Cappuchina whenever she was on the other side of the front screen door. Maya would hiss and growl but then leave the area. Smokey - she was just curious, not much interested in Cappuchina one way or another. In fact, I recently let Smokey and Cappuchina be together inside, and they simply ignore each other.

It has taken several months, but Cappuchina has made her way into the house. First she started waiting by the door and when we opened it, she would dash in and head for a blanket on the couch. When we caught on to that trick and started blocking her with our foot, Cappuchina took matters into her own paws and learned how to work the screen door until it opened and she let herself in.

As long as all the cats are where they are supposed to be, having Cappuchina inside is not a problem. Occasionally we forget and let one of the cats in from the back terrace. If Cappuchina is sleeping, nobody bothers her, although they may sniff her. Cappuchina doesn't flinch, she pretends to be sleeping but we've caught her with one eye peeking.

If Cappuchina is on the floor, she is inviting attack. Minina will chase her and Cappuchina runs in fear to the front door, where she then lies down to avoid any further attack by Minina. If Maya spots Cappuchina, she will just run at her and knock her over and then run off. Nobody really gets hurt and there are times I'm hopeful Minina and Maya will eventually accept Cappuchina. But it needs more time.

So, Cappuchina spends her days inside when the indoor cats are out on the back terrace. She enjoys snuggling with us or just hanging out. And despite the fact that she and Luna really aren't friends, they have developed a pact, it seems...they can now both sleep on the couch, close to each other, without getting into a battle. 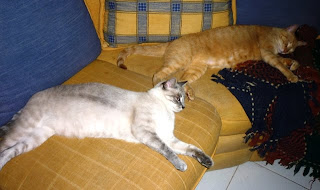 Gotta love the dynamics in the cat world. We are down to 2 cats--having had up to 7. The 2 we have left were never buddies, but when Bubble died last year they had to make nice with each other! They still are wary of one another, but are on better terms than ever before! ( they are 13 & 16)

A fantastic picture of Cappuchina. Thanks for the update on how the kitties are all getting along. We have found that it can literally take years for cats to accept each other if at all.

OMG! They are precious! I love Cappuchina's coloring and her tiny face with a big body.

Cat dynamics are not for humans to understand, they have secret signals. It's endlessly fascinating to watch them though, I spend way too much time doing just that.

Cappuchina is a treasure.I knew she would work her way inside. jeje