It's the iPad's Fault

My daughter asked when I will be writing another blog. I told her I didn't know, except 15 minutes later here I am, writing a blog.

Why haven't I been writing? Quite a few reasons, actually - time and frame of mind are the immediate reasons that I can cite. But it may be something much simpler, actually.

I inherited the iPad after my father's death. It is so simple to use. I can get all the emails, read all the forums, research stuff on the web, and play Angry Birds. There are days I never even turn on my laptop, and even when I do I just use it for the applications I have on there. My preferred tech toy is the iPad.

The only thing I don't care for with the iPad is typing. I am a touch typist, and the keyboard on the iPad turns me into a hunt and peck typist. It slows me down and I make lots of errors as my fingers touch the wrong keys on the touch pad. If I have an email reply that will be more than a line or two, I open up the laptop so I can properly type.

It's not really rain, it's water in the wind. Another norte (north wind). The weather has been gorgeous lately, and even the last couple of nortes only lasted a day and were nothing really - a little cloud, a little rain shower, and then they were gone.

But this fierce beast that blew in yesterday afternoon is going to make it a non-tourist day at the beach. A good day to lay in a hammock or snuggled in bed, dozing or reading or a little of both.

I laid in bed just one minute too long this morning and was left holding the garbage as the truck blew past me and wouldn't stop to let me throw my garbage up to the guys in the truck. So I borrowed my neighbor's trash can instead of putting the bags over on our platform, because the wind would toss around the unsecured bags in no time, making a mess in the street for me to clean up later.

The good thing is that I don't have to water the plants, we've had enough rain over the last week that I only watered once. Normally I enjoy watering the plants, it's something I don't do often because that's Miguel's passion, but with him away this week, it's one more chore that I had to pick up to keep everything in order.

Here's a short video I took the last time we had strong north winds like this. I stood on the shore and it was all I could do to keep my feet on the ground. Today is probably not quite as strong, but it's probably close.


As I was writing this, my sister posted on Facebook, reminding me that they just got more snow and the temperature is -8C. So I guess I'll shut up about the weather, it could be so much worse. Lucky for them they are headed to Jamaica to attend my nephew's wedding. Looks like Kyle is ready, wearing the little suit I bought him here on Isla... 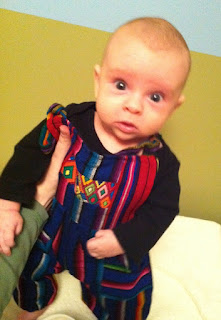 Last night we went to Comono's for dinner. I had only been there once before, several years earlier, and it was an off night for service, and I probably didn't order well (as I recall it was some kind of sandwich).

Before the food was brought out, they gave us a plate of tostadas and a delicious dip called something like 'chimy chimy' - a parsley, onion, garlic, olive oil, balsalmic vinegar combination that was great.

We also enjoyed the house salad and cheese balls. I rolled my cheese balls in the salad dressing - yum!

My chicken came with fries, and even though they were frozen fries, they were really good, not dry and hard like so many other places.

Randy's meat plate looked interesting from my side of the table. I saw a sliced-open sausage, 3 hamburg patties with a white cream sauce on top, and then some little things that looked like upside-down animal feet. Closer inspection revealed the feet to be quartered hot dogs, cut twice across one end, sort of like you do with a radish or something when you want to make it decorative. The pieces of hot dog had been deep fried, and were a little crispy and a deep brown color. I couldn't resist trying one, and was pleased to find that they had put a little mustard and relish in the center of the decoration end - just enough to give it some flavor.

I hate to admit this, but the hot dog was the best part of the meal, and I don't say that with sarcasm, because we thought everything was well-prepared and delicious. We decided we might go back and order the meat plate to share, and ask them to skip the other meats and just load the plate with little hot dog feet.
Posted by Sue at 12:39 PM 5 comments:

I love my bedroom, especially in the morning when I get to lie in bed and look out at the pink sky that signals the rising sun. I don't even have to get up to enjoy it, I just lie there and smell the coffee - literally, because Miguel has 'pushed the button' down in the kitchen. These cooler mornings make the smell of fresh-brewed coffee waft up the stairs just a little stronger. Like the smell of the tortilla factory - cool mornings bring that unique smell and remind me of my childhood when we walked to the skating arena surrounded by the wonderful smell of Shredded Wheat and Shreddies being baked in the Nabisco factory.

Riding on the back seat of the golf cart during sunset gives me an extended view of the pink skies. The other night I got lucky, we drove north when the sun first started to set and I watched it all, and then we drove south after the sun had gone down and the sky was a pink canvas. Had I been in the front seat I would only have had time for a glimpse before it went out of view.

Since Miguel has been doing property management, I sometimes accompany him on his house-checking trip in the early morning. Pink skies over blue seas, fluffy clouds, and gentle waves signal another beautiful day. At times like this I marvel that I am so lucky to live in such a place. I've become a morning person in the sense that I like to get up early, even though I don't necessarily like doing anything once I'm up. Just slowly sipping my coffee and enjoying the fresh air, the beautiful plants, the birds singing, and the other morning noises in the colonia are enough to start the day.
Posted by Sue at 7:49 AM 4 comments: