The situation with Luna

Yes, I have stalled writing anything here because for the last 3 weeks Luna has been seriously ill and I expected that each day would be her last. I posted a lot of details on Facebook during the first week and a half, but then changed course when it became clear that action was needed to help Luna either get better or make her way over the pet rainbow. Luna has liver disease - she's yellow, and some days she's orange. It's a horrible disease and usually fatal for cats. We don't know the cause, it came up suddenly 3 weeks ago when she showed up with obvious abdominal pain, nausea and vomiting. And she was jaundiced. A vet was called.

After a week of monitoring, rest, and a few injections for pain and liver protection, a starving Luna was eager to get back outside. Since she just moped under the bed when forced to stay indoors, the vet said to set her free to see how she did out in the jungle, hoping she would eat geckos or birds and get her liver working again. For the first few days she drank water and then went off until the next day. She was still rejecting any type of food I put in front of her, and in fact, just the smell of food made her vomit the precious water she drank - the only thing keeping her alive. At first she seemed to get stronger and her jaundice improved, and there was hope she would mend herself. Then one day after a nice cuddle in the hammock, she just didn't come back. I let it go for that day and the next, and when we still didn't see her by the following afternoon, I went looking for her.

I went through the jungle near the house, around an abandoned, unfinished building, gently calling her name, never expecting to find her because I was sure she must have died. But amazingly, out of the bottom hole in the building, crawled Luna. She was skin and bones, and crouched as if in incredible pain, and she was very yellow and dehydrated. I was not going to just leave her there, she came out to me so she must not have wanted to be left alone. I brought her home, put her up in the room on the third floor, and called the vet. The message I left was basically that I needed him to come and put her down as she was suffering.

But it was Saturday evening, so the vet did not get my message. All day Sunday Luna laid in her sheltered area in the room, taking sips of water when offered, but otherwise just looking miserable. I didn't expect her to live to Monday morning, but when I went up there to check on her, there she was - looking at me with those yellow eyes. I called Delfino again Monday morning and told him the situation - he said he would come around 2:30.

And he did. Except he picked up Luna and looked her over and said she had hepatitis and rather than put her down, he wanted two days to work her up. Ok, if the vet thinks the cat has a chance, I'm not one to argue, especially when I fully trust the vet to know when the cat is suffering beyond hope.

So...Delfino put Luna on IV. A resident black cat took up watch on top of Luna's cage, and even when Luna was moved to a different cage in a different part of the room, the cat continued to sit on top of her cage. It was like Luna had a friend keeping the faith with her. The IV ran well for a day and a half before Luna removed it during her second night there. She then received subcutaneous fluids, which she disconnected on Wednesday afternoon. So since she was feeling stronger and looking better, Delfino sent her home, hoping she'd eat where she felt comfortable.

But no luck, Luna turned up her nose at everything offered, and just slunk under the bed and camped out. She did drink fresh water when offered, but just for that short time out of the clinic she got orange again. Delfino brought her some Ensure, saying that cats like sweet liquids. Maybe most cats do, but Luna isn't most cats. It was a struggle to force a teaspoon of Ensure into her every two hours.

After the forced feeding I spent some time just sitting with Luna on my lap. She enjoyed stroking around her chin and face, but was so weak she really just wanted to sleep. Delfino said if she was no better by Friday morning to take her back to the clinic. So...back we went.

Delfino restarted the subcutaneous fluids on Friday, and by evening she looked much better. So much better that during the night she disconnected her IV again and broke out of her cage - nobody knows how she did it. I suspect the black cat may have helped her, the two of them poking at the springs from both sides may have succeeded in prying it open.

They were shocked to find Luna missing from her cage on Saturday morning, but finally they found her tucked into a corner in the bathroom, safe and sound. And still refusing to eat, so she went back to the cage where Delfino said they would watch to see how she got out. When I went to see her Saturday evening she had her subcutaneous fluids running, and was in a smaller cage, so I suspect she broke out of the other cage again and they had to put her in a different one.

So there she sits. Her eyes are bright, she 'talks' to me when I speak to her, and she enjoys the physical contact I give her. I visit her twice a day to keep her hopes up (and maybe ours?). She still won't eat although they keep putting food in the cage with her, which she eyes with disgust. I even took a piece of fish to her the other night, thinking she wouldn't be able to resist a taste. But she turned her nose up at that too. She simply does not want to eat, and if you read up on the disease, it is a common problem but one that must be overcome in order for the liver to start working normally again.

The fish smell drove all the other cats in the room nuts - they all started crying and the big black cat that had been Luna's mascot, jumped from the other table, misjudged and smashed its face on the edge of the table. It fell to the ground and its jaw was open - I thought it might have broken the jaw, but maybe it was just displaced because the cat fixed it. One drop of blood on the floor and the cat went off still shaking off the pain from the bad jump.

I've had dreams that Luna died, I am prepared for her to die as I know how serious this disease is for cats, but Luna continues to just sit there and glare at us. She is no longer in pain, she is not suffering other than her dignity at being confined to a cage. Delfino says we just stay the course, and wait for the day she will start to eat again. We shall see, we are all hoping for a recovery for Luna. She's one spunky cat.

This picture was taken a month ago, just one week before Luna became ill. 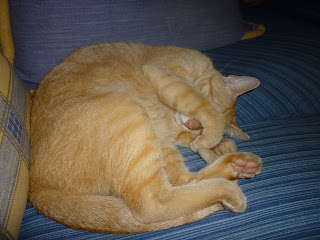 Awe Sue, That is heartbreaking. I hope that she recovers. I am thankful that you have such a wonderful vet and she isn't suffering. Healing wishes sweet Luna.

Poor sweet little Luna. It's heartbreaking, I'm sure, but if there's a chance she'll recover, you've got to take it. Hugs to you all.

Wow: my best wishes to Luna. She is a lucky cat, and you and Miguel are lucky humans, to have a vet like Dr Delfino.

There are few things worse than seeing a beloved pet suffer...I am glad she is feeling better, just hope she starts eating again! I wish all of the world could take you and Delfino's lesson in compassion towards animals...

Sue, I hope Luna starts to eat and recovers. Delfino is such a devoted vet. Get well Luna!

I hope she purrs during your visits together.

Prayers for Luna's recovery and for you as her human Mom.