To this day I do not understand why there is not a mechanic on this island who can configure our accelerator so it works without Miguel's fishing line hook-up.

The first part to starting the golf cart is lifting the seat, putting the little yellow gear wheel into neutral, pushing on the accelerator cable, stepping on the gas, and squeezing the air hose. Once the engine kicks in, you let it rev for a minute or so, to warm up the engine. Then you quickly put the little yellow wheel back into gear, put down the seat, and hop on.

Here's how it looks under the seat - you can see the little yellow wheel (far right), the air hose (top left), and the accelerator cable with a fishing line attached (center).

Why is the fishing line is attached to the accelerator cable? Because when trying to start up after coming to a stop, the engine can't get enough gas. So Miguel pulls on the fishing line which pulls on the accelerator cable, which pushes some gas through and then we go. Once we're in motion, we don't need the fishing line, it's just to start up from a dead stop. This is the line that has been threaded from the inside of the cart, to the outside where Miguel's right hand can reach down and pull on it as needed. 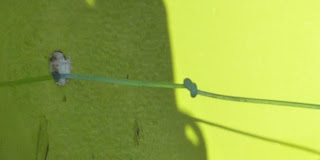 The big black button on the front is the choke (right), and we have to use that when starting up again while the engine is still warm. Rather than lift the seat, a few pumps on the choke and a few yanks on the fishing line will often be enough to get us on our way. 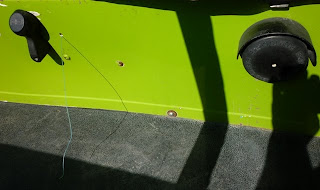 And so, we had already been for a little drive and the engine was still hot. We had just come out of a dead stop to make a left turn at the corner near the Navy Hospital (remember - dead stop means pulling on the fishing line),  when the golf cart stopped. Miguel again pulled on the fishing line but nothing happened except he ended up with the entire piece of line in his hand. Realizing that something was broken, he got off the cart and started pushing it backwards towards the curb. Loco and I were still on the cart, and I tried to help by pushing back with my right foot on the road. There was a bulldog across the road and Loco was making a fuss and looking for a confrontation, so I had to keep him on the cart. There's nothing like breaking down in the middle of a busy road and having to deal with a dog clambering all over you trying to get at another dog that is simply meandering down the road minding its own business. Miguel didn't have time for it, he just wanted to get us off the road.

Finally I thought there was a chance to get off the cart (to lighten the weight) so I stepped off but just then Miguel pushed again so I ended up hopping on my left leg in order to get my right foot out of the way of the front wheel (Miguel wasn't paying any attention to me, he was watching the road). I tried to tell him to give me a chance to get my balance and help him, but he has tunnel vision and hearing at times like this, and I was talking to the pavement and was on my own to get my feet flat on the ground and not fall flat on my face or get run over by the cart.

Finally we got to the curb and Miguel lifted the seat to take a look. I took off my sunglasses in order to peer inside, putting them on top of the cart. I told myself not to forget the glasses, and twice I put them back on again, but with a sweaty face, they were bugging me so I took them off and placed them on the roof. And of course, as I blogged previously, in the end, I forgot them.

The accelerator cable had broken from its mount. Rather than just leave the cart, Miguel decided to try to connect the cable up using his piece of fishing line. But the line had a knot in it, and apparently he didn't like the knot. So he rummaged in the front compartment and found some weird handle thing and used that to bash the line until it broke and the knot was tossed aside.

Then he tried to create a loop with the little stiff piece of exposed wire and his piece of fishing line, but of course, the wire was far too stiff to allow itself to be tied. And so finally Miguel had to give up, and we left the cart there. As blogged previously, Miguel walked home with Loco and then left in search of a part and/or a mechanic.

Although he had taxi fare, Miguel walked to La Gloria to the home of one of our part-time mechanics. "Sepio" (nickname "Brush") was busy repairing a moped and told Miguel he would have to wait. Why Miguel didn't go one block over to his home and pick up his moped that he stores there I don't know, but in any case, he waited for about 30 minutes.

Finally Sepio was ready and he and Miguel took off on a moped, with Miguel borrowing the helmet of a friend who was doing some concrete work at the home of Sepio. They got as far as the drive-through beer store, just two blocks from our home, when the moped sputtered and came to a stop.

They were out of gas. The mechanic took the cap off the gas tank, placed his mouth over the hole, and blew, trying to force the remaining drops of gas into the line. They succeeded in going another 10 meters or so when they stalled again. This time the men, while seated on the moped, bounced up and down and rocked back and forth, trying to coax fumes through the gas line to keep going so they could get to the gas station. They must have looked ridiculous.

Miguel had had enough of trying to get the moped running on fumes, and said that they needed to leave the moped there and take a taxi to the golf cart. By the time they got to the cart it was dark, but the mechanic fiddled with the little cable and got it connected and off they went - back to the mechanic's house where Miguel returned the helmet, paid the mechanic, and drove home.

And so, with the golf cart once again 'repaired', we are off and running again with Miguel's fishing line solution to a bad accelerator problem - it's the only thing that works. Sort of...
Posted by Sue at 7:16 AM

Sorry, but I practicallly fell off my barstool laughing over your golfcart woes. Love your stories Sue! Craig also solves his mechanical problems with weird solutions.

I have not dealt with Sepio since Wilma and there is a reason for that. I hope Miguel comes to his senses!

Z - I did say "part-time", as in...when we're stuck. He always steps up when Miguel is in a bind, and he always gets us back on the road, even if for a short time. But for regular repair, we use a sort-of family member - he is busy and it takes a long time to get some of the simpler things fixed. But we've been through a lot of mechanics, that's for sure...they all have 'stories'.

I just love your stories .. So funny, but sorry that I have to laugh! It's time for a new "used" golf cart! Maybe as a Christmas present!!??

K - if only they were stories instead of real life! Hahaha...

And, a new used golf cart for Christmas (or any time, actually) would be great except I don't know who's going to buy it for me.

Sue, I'm going to try posting this again! I wonder if I got distracted and just didn't finish all the steps?

Sorry, but I almost fell off my barstool laughing about your golfcart woes. You have a real knack for telling stories! Craig also has a talent for coming up with strange mechanical fixes!

Beck - I remember another time you commented about Craig's scavenger ways. He would blend right in here!

That cracked me up! I know it can be frustrating but since all this is happening on a beautiful island in the Caribbean... it's not so bad.

At least you are keeping your sense of humor through all of these golf cart fiascos. Not so sure I would be able to!

Wayne - what else can I do? It's not like I can just go out and buy a better cart. We're stuck with this one, unfortunately. Thanks for the comment on the Twitter sidebar - I've finally learned how to blurb in 140 characters, and with my ipod touch at my side, it's easy to just tweet as the mood strikes.

Bill and Michelle - thanks for the tip, but the lack of parts is not the problem. The problem is the cost of such parts and how much more we are willing to sink into this golf cart. The accelerator cable was something like $150 (just for the part), and so I think they either found a used one or used one for bicycles. However, even before, when the cable was the one meant for this cart, it still had the same issues. Our usual mechanic says a new carburetor is what we really need, and he was going to see how much a used one might cost. We could dump the cart and sell for parts, but then we wouldn't have any money to replace it. So we endure. And I bet some of my blog readers are tired of hearing about the woes and just want us to get the darn thing fixed! (if only it were that easy).

I think you need to get a video camera and film this stuff, put it on youtube. You might win funniest home video or something so you can afford to fixup Limey...this is just to funny.