Yesterday I pulled another load of books off the shelves. I flipped through each one in case I had tucked some money in there once upon a time. Alas, I didn't find any bills, but I did find:

- a shopping list, including groceries. Since the list was left in a book, I probably forgot some of the things on the list. But that's normal, lists are just guidelines - unless they are made for special occasions, in which case, forgetting even one item on the list could ruin the meal or force another run to the grocery store and another temptation to pick up that package of butter tarts that I reluctantly passed by the first time.

- obscure programming code, scribbled during a moment of enlightenment while in the middle of doing something other than programming. Jotted down so I wouldn't forget my brilliant piece of code. Except I probably forgot where I stuck the note...

- a sticker inside a book on C programming, with a picture of a kitten and a quote from the Serenity Prayer:

"God grant me the serenity
to accept the things I cannot change;
courage to change the things I can;
and wisdom to know the difference."
At the bottom of the sticker was a printed section: "This book belongs to..." and I had filled in my name and then underneath I wrote: "and I never want to use this book again!". I have no recollection of being so fed up with that book, so can only imagine when and why I wrote that. Once upon a time I wrote a billing program in the C language that was used to bill the provincial government for anesthesia services. I sold the program to two anesthesiologists, and they happily used the program until the year 2000 was approaching. I warned them that they needed to invest in a 'real' program as I would not be updating my code to accommodate Y2K. By then I was a consultant, not in programming, so the end of my little program spelled the end of my side-line career as a programmer. Adios book - I actually like writing code, so I must have been really tired and frustrated when I wrote that nasty message inside the book. I'm sure someone will get a chuckle out of it when they pick up my old book (which is now sitting at Goodwill).
- an Anne Geddes print which was stuck between books. A print that has been missing for about 12 years, when I had a painter redo Jen's little room while I was off on one of my weekly travels for work. We had searched high and low for that print, and came to the conclusion that the painter or his assistant helped themselves to the print. Nope, they just stuck it somewhere in the bookcase so it wouldn't get splattered with paint, and there it sat until yesterday. I called out to Jen, who was sitting in her office..."remember that Anne Geddes print we could never find?", and she immediately talked about the daisies and three flower pots with babies inside. I can't believe she remember the details of the lost print after all these years. 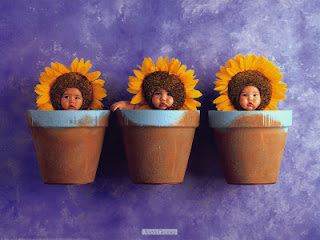 Going through old books brought back memories of all those years I depended on computer technology to make a living. A lot of what I did was for personal growth, not income, but it all helped in my overall understanding of how computers 'think'. Programming in BASIC - where I methodically typed in lines of code from a magazine to show the map of the US. The map was also a learning tool - name the state and the state capital...I learned a lot from that little program. Programming in COBOL - where I developed a grid for chess players to use during tournament play. Databases - Access, Paradox, Quattro Pro, and Crystal Reports to query the data. Microsoft Word and Lotus Notes - from the old days of floppy disks and Windows 95.
I am still a book hoarder - my bookshelves in Mexico are lined with personal favorites, but also plenty of technology books, which will one day be outdated. I hate throwing away books, I take everything to Goodwill and let them decide what is worth keeping and what isn't. I guess when I purge in Mexico I'll have to bring a suitcase of books back to Canada to take to Goodwill again. It's the only solution for a pack rat...thinking that our precious things are not trash, but someone else's treasure.
Posted by Sue at 9:38 AM

I love Anne Geddes. She is so creative in her photography.
So found winning lottery tickets either I take it? LOL!

Rather than hauling books back to CA from MX, find a library down there which needs them! You can save your suitcase space for something else, and I'm sure there is a need for them in MX.