There is one problem with using Facebook, Twitter, and blogging, and that is that people who follow you on all the social networks you belong to, will get tired reading the same subject matter on each of the forums.

So for those of you who read my blurb on Facebook yesterday, I apologize. But to be true to my blog and my broom 'fetish', as one Facebook friend called it, I must post this picture: 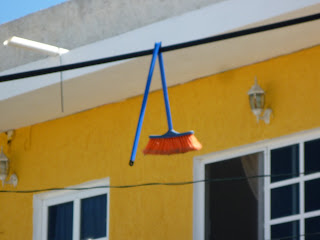 The broom is hanging over one of the streets near the baseball field. How it got there, or why, is anyone's guess, but I'll take a whack at guessing what happened.

- an angry wife, while telling her lazy slob of a husband to get off his duff and do something, claiming she'd had enough of waiting on him, slammed the broom across her knee and tossed it out the window. The broom just happened to find a grip to prevent itself from falling to the street below.

Any of the above could be true, but it's the 'tossed out the window' part that I don't quite buy.

Maybe, as one Facebook friend commented, "poor broom was probably replaced by a Swiffer and took its own life". A broom suicide by hanging. Hmmm...that just might explain it...
Posted by Sue at 7:33 AM

Truly bizarre. It's almost like someone hung it over that wire with a purpose. Maybe a witch was flying by and her broom got caught on the wire, bent, and she plunged to the ground?

LOL! Lots of great ideas how it got up there!

That photo makes me giggle!

If the witch's shoes were thrown onto the roof, whomever bent her broom better watch out.

The photo reminds me of neighborhoods where there are pairs of tennis shoes hanging from overhead wires. That typically indicates wannabe gang activity. Perhaps there is a new gang of maids in town, and they intend to viciously sweep your patio?

How about a drunk witch?