The weather has turned a bit which means our animals are snuggling a little closer these days. We had a nasty storm over the weekend, I think the cats were confined indoors for about 4 days straight - so they were eager to get outside as soon as the weather cleared.

I have started opening the kitchen window near the sink, even though it no longer has a screen (thanks to the late Luna, who was always determined to get inside the house one way or the other). With the back door closed due to the rain and mosquitoes, the cats have been using the window as the means to go in and out on the back terrace. Only Smokey tended to stay outside, but finally she caught on and now she lets herself in and out at whim too.

Maya can't keep track of the cats as much as she'd like - she races through the house and up and down the stairs and watches everyone like a hawk, but the other cats have started retaliating to her heavy rule and she is no longer the queen. The other evening Smokey had Maya crouched under the desk, and then she pounced on top of her - even though Smokey was just playing, it made Maya cry and run away. Maya is only a bully when she can get another cat trying to get away from her. When a cat stands strong, Maya backs away. So although there is always at least one cat spat a day, there are fewer than in the past. I figure they will have to work it out, I'm not going to separate them because they can't get along. The house is big enough for everyone, and generally they all have their favorite spots. But the weather changes that, they are tropical cats and they get cold.

Right now Maya is curled up at Miguel's feet on the couch. Smokey is in the camp chair by the tv, a chair that first was favored by Minina and then Cappuchina - now it's Smokey's spot. Minina likes to lie alongside me, and Cappuchina likes to lie on top of me, and when I won't allow it, she finds another place - like the desk chair. And Loco is either lying along the side of the couch or under the bed, depending on whether we have thunder or not. Blacky is over with her other family, otherwise she'd be stealing any piece of cloth left on the front terrace - she likes to make pillows.

We have some new residents: Tigressa - a tiger-striped female who pretty much hangs out on the front terrace but follows us down the road when we take Loco out to the bathroom. Tigressa walks right in my feet, she has tripped me more than once. And she has a voice - she thinks she should be fed as soon as we open the door in the morning, and any time she hears food hitting the dishes in the kitchen. Tigressa isn't fussy about where she sleeps, as long as it's on the front terrace somewhere... 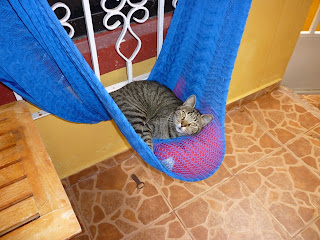 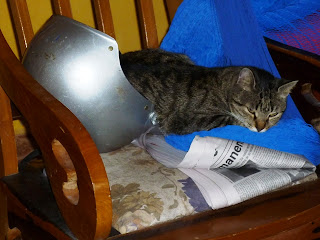 Tigressa actually thinks she belongs inside like the other cats, and she is quick to walk in when we open the door if we don't get our feet in her way. Tigressa in the house would cause a riot as the other cats hate her (other than Cappuchina, who doesn't mind any other cats who lurk around). We had someone come to the house a couple of weeks ago, and luckily our cats followed us upstairs when we went up to show them the terraces, because when we came back down, Tigressa had pulled open the front screen door and had tucked herself into the far corner of the sofa bench, snuggled on a blanket. She knew she was wrong though, because when we finally spotted her she tried to duck her head, as if she wasn't there. The other cats were still enjoying exploring the spare bedroom upstairs, so we were able to get Tigressa out before we had a war on our hands.

I think Tigressa was abused with her previous owner because she winces when we try to pat her on the head. She likes being touched in other areas but always closes her eyes and ducks when we get near her head, although she is getting much better so I think she has learned that we are not going to hit her. Makes you wonder what animals endure in their little lives, and we're happy to give her a safe, happy home.

There is a black and white male cat who has also sort of moved to the front terrace, although, unlike Tigressa, he spends part of his time out in the jungle. But he shows up for almost every meal - Tigressa gives it away with her howling at the door, so now he officially has a dish of his own. He will not allow us to touch him, he maintains his distance even though he joins in the howling at the door. And he gobbles down his food and then steals Tigressa's food when she isn't looking, but she doesn't seem to mind. We need to trap him though, and get him neutered.


Finally, there is Rabana (Radish - don't ask why - the name is my misuse of another Spanish word and the name stuck) and her boyfriend/brother/friend (we really don't know the relationship). Rabana showed up as a kitten, she had a sibling that disappeared within days of the first day I saw them. She is a small cat but has already had one litter. I wasn't sure if she would survive delivering kittens, or if the kittens would survive, but she raised two babies to a nice size, and then she went into heat again and the kittens disappeared. Not sure if the males who showed up to court Rabana chased them off or what happened because Rabana was an attentive mom and she liked to play with her babies. The last time we saw her with both her babies they were across the road, and then one baby was gone and a few days later the second one was gone. Hard to know what happens out there - dogs, poison, cars, or the kittens might just have wandered off and gotten lost. But because Rabana was pregnant and then nursing, we started putting some food for her across the street.

Rabana quickly learned the sound of the dogs being fed, and figured out that also meant some canned food was going into the dish, so she got braver and braver and patiently waited on the front entrance steps for me to throw her a small blob of food. She would grab the food and run under the gate and out to eat it up.

Rabana is pregnant again, and she has been here long enough now that she joins in with Tigressa and the black/white cat when they cry to be fed. So now when we open the door in the morning there are three sets of eyes eagerly hoping we have food, and we are greeted with a morning song. We still put food across the street for Rabana, because she has a side-kick - a cat that is probably her sibling, and he has suffered a broken leg so is a little handicapped. She allows him to eat with her, but when she was in heat he did not mate with her although he lurked in the background when her other suitors were around. Now that she is no longer in heat the other males have moved on, but the grey cat is still here, and the other morning, after our weekend of wind and rain, it was such a cute sight to see the two cats snuggled on the front seat of the golf cart. 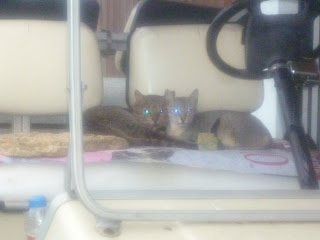 Oh yes - the wind and rain - it was pretty bad, but Loco, who hates thunder and water, insisted on making rounds with us. Luckily, he has a raincoat - in fact, it's better than the ponchos that Miguel and I use. Here we are on our way to check on the houses after the storm... 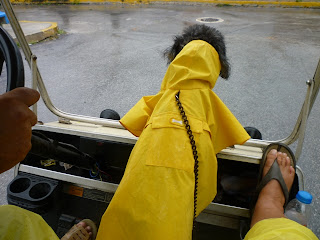 I love your stories of all your animals! You do so much for all of them. Glad you're back to blogging!

I enjoy reading about your day-to-day life and the lives of your animals. Keep up the good work.

Thanks for the great update! Your family is always growing. More people should have such big hearts.

awwww.... I love you guys! Those are some seriously cute pics too.