We have three bullies in the house: Luna, Loco, and Maya.

Luna is mostly a hands-off bully - she bosses everyone around simply by growling. Occasionally she will take a swipe at a passing cat, or my legs, but it's just a swipe - easily avoided if you are on the alert. Everyone in the house respects her because she just looks like she'll tear you to shreds if you don't. She can be very nice, but when she's not, look out!

Maya is the heavy-weight champion in the house. I was looking through pictures to try to figure out when she ballooned into the large mass of cat she has become. It looks like it happened between April and June of this year. I suspect she weighs about 15 pounds by now, and she's solid. Despite her size, even Maya stays out of the way of Luna.

But Maya has learned that she can flatten Minina and Smokey and sit on top of them, pinning them down while she bites them. They struggle to retaliate and get away. They cry, and it sounds real - like she's really hurting them. She chases them and is so fast, despite her size, that they can't outrun her. They hide under furniture but Maya just sits guard, waiting for them to make their move.

Maya is not like this every day, so I don't know what her trigger is. Most days peace reigns in the household - the cats play, they lick each other, they clean each other's faces and ears. On the days that we realize that Maya is playing rough, we try to intervene. Someone gets a "Time Out" Last night Maya slept in our room, which means she slept in our sink. I think Smokey and Minina appreciated the peaceful night.

Loco is a strange dog. He used to be pretty social, playing with any stray that came along (he even had a girlfriend, although he wasn't able to do his part so it was platonic). But he has always had a weird streak, especially when on the golf cart. If he sees a stray, he growls and fusses and does his best to get loose and chase the other dog. If he is out in front of the house and a stray comes along, Loco chases it until he catches it and then he bumps into it with his chest. Most dogs whimper and run away, scared to death. On the golf cart he sits poised until the dog approaches, and then he lunges.

I've tried various methods to calm him and stop him from getting upset in the first place (distraction, soft talking). Nothing works. Yesterday we were driving along the back road and were being chased by the usual yappy black and white dog. Loco pays no attention to that dog, and we know he will stop dead in his tracks if we also stop. But yesterday there was another shaggy brown dog just ahead of us, and Loco spotted it and started trying to get away to chase it. He made so much noise that the brown dog got scared and took off running. We were quite the sight - Loco on the cart whining and growling and barking and thrashing around, the black and white dog chasing alongside of the cart, barking his head off, and the brown shaggy dog running at full speed in front of us, occasionally stealing a look behind him to see if we were still there.

In the end, the brown dog zipped down a side street. The black and white dog got scared off by the fright of the brown dog, and that just left Loco licking his chops and looking around trying to figure out where his victim had gone. Why Loco thinks he owns the island is beyond me. I hate the aggressive behavior and hold him off if I'm around. Most dogs are not the least bit interested in a fight and they sort of just look at Loco like he's nuts (he is), and they saunter on. Actually, Loco isn't interested in a fight either, he just wants to 'bump' them and show them who's boss.

Maya and Loco are buddies. They sleep at the foot of the couch, close to each other, and usually on top of Miguel's sandals. Miguel calls Maya his 'gato pero' (cat dog). 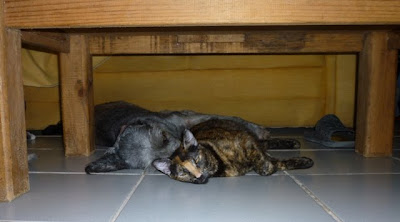 They look so innocent, but dont' be fooled - underneath lurks a bully.
Posted by Sue at 3:31 PM

Oh I wish you had a video of the animals in action! I love reading your stories.

It must seem like a Circus at the house with all the animials and the varying personalities.

I almost rolled on the floor with your description of yesterday's golf cart outing! Wish I could have seen that sight! We've got a Loca at our house too. In fact, all our dogs have been nuts. Hmmmmmm.

The pecking order between pets is amazing. Siince we are down to 2 cats & the dog it's gotten more interesting around here! The cats were never buds & only are now some of the time. But both of them are great with the dog!

K - I have my hands too full to be taking video at the same time. But I know what you mean, and if we ever buy a video camera, I will do my best to capture something for you.

Bennie - you know it, you've been here.

Beck - guess dogs are just plain goofy? (must be why I lean more towards cats).

Ann - it's fun to watch the interactions and the relationships.