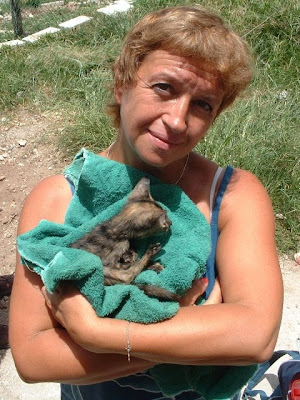 We "met" through Julie's Isla message board, and then met in person at one of the chatter gatherings here on Isla - probably in 2001.

We shared a love of animals, and especially cats.

In the early years we would get together when we were both here at the same time, usually with friends. A couple times we went for dinner together, and it was then that I learned about Renee's past life in Belgium and how she single-handedly raised her three children, educated herself, and moved into a successful career.

She was proud to be a Canadian immigrant. She loved Canada, and especially Montreal. She planned to share her life between the two countries. Canada because she loved it, her children and grandchildren were there, and she needed to be there 6 months out of every year to keep her health coverage. Isla because she loved it, she had many friends here, and she could live affordably. She seemed to have the best of both worlds.

Renee loved to walk, and we often came upon her during her walks - sometimes alone, sometimes with a female friend who was visiting. Renee was heart-broken over the development at Punta Sur, so much so that she stopped walking in that area. She got a bicycle, and we'd also see her cruising through the colonias to do her errands.

Renee spoke French, Spanish, and English. I spoke English, Spanish, and French, although not nearly as fluently as Renee. Between the three languages we managed to understand each other, mostly. Renee helped me find a pedicurist, she explained the options to get Miguel to Canada for a visit.

Renee was passionate about dolphins in capture. She would describe the suffering she witnessed with anger and sadness. She loved the pelicans, and used to tell me to say "Hi" to them when she knew I was coming to Isla.

Renee was a strong woman, very sure of her opinions and not afraid to express them. She had just received her FM3, doing all the work herself. As she said to me just a couple of weeks ago, when I asked if she used a lawyer - "No - I speak Spanish, it's no problem for me".

Renee and her daughter Emily were great friends of Delfino's (our vet). Renee would take in sick kittens and nurse them back to health, and would grieve for the ones she couldn't save. Renee gave much of herself to the people and animals of the island - she cared, and she did something about it.

Emily often assisted Delfino at the clinic, and I remember that even at the tender age of 16 she had a mature understanding of the life of the vet - the joys, and the sorrows. Renee was proud of her daughter, and along with a love of animals, they shared a love of diving.

Renee was murdered yesterday, here on the island she loved so much. Supposedly she was killed by someone she knew, someone who had threatened her. Rumors are rumors, but the horror of her death is unfathomable. She did not deserve this.

My heart goes out to her family back home in Montreal, and to all her close friends here in Mexico. Renee was respected and loved, she was a beautiful person. Renee found beauty in simple things - the sunrise, the sea, the sand. She described herself as a nomad in her latest blogs. She had that kind of soul. 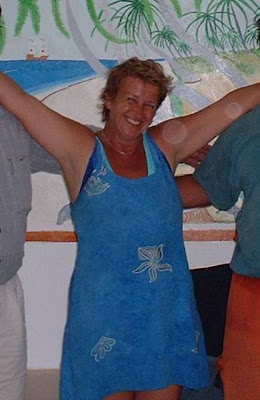 Sue,
Thank you for the tribute to Rene. I never met her although I knew her when I saw her. This is so sad. Such a good person who did make a difference to the world she lived in.

What a beautiful tribute to your friend. I only knew Renee through the internet. I am so incredibly sorry to hear about her death and I know she will be missed by so many people.
-Jana aka Moongrl722

What a noble post. A great tribute. Renee and I were friends, yet argued about the English languge. Shrimp,ok, but you said clams. Why not shrimps? She was passionate about her point of view.

I had dinner with Renee in May at Poc Chuc. We had such a wonderful visit - caught up on our lives. She was so happy. I read your blog with sadness - she is gone now. How can that be? She was a kind person and treated people and animals with respect and love. I am in shock.

This is all so sad and horrible and senseless.

Renee was a friend to all who love the island and truly an active lover of all animals.

My heart aches at this tragedy.

A lovely tribute to a lovely person. Thank you Sue - this is the first time I have smiled today.

Sue, that was a wonderful tribute to a lovely kind woman. It's heartbreaking to think her life could end this way.

What a wonderful tribute Sue, I never met Renee in person, just knew her from the message boards, from what you wrote, it is exactly the way I remeber her.
I am so sorry for all of her friends and family, she was such a good person.

That is a beautiful heartfelt tribute Sue. We never met Renee but I felt I knew her through reading her blog, it was always a pleasure to see the world through her eyes. She was talented writer and photographer. She will be missed by many.

Thank you for that beautifull tribute sue .
Renée was my blog editor untill a few months ago , so we get together almost everyday ,we share several think together we where both born in belgium we where speaking the same languages and where both crazy for les pains au chocolats(she was stilling them right out the hoven and always burn her self and said mmmmmm they are so good when they're still hot).But she was a very generous persons,and she will be miss Reposes en paix renée
Lolo lorena

Sue, I am so sorry for the loss of your friend, a lovely, kind woman who touched so many people's lives with her poetic spirit. A terrible, haunting tragedy.

What a beautiful tribute to a beautiful person. I'm from Montreal, and we had connected albeit briefly on Julie's board through that and our love of Isla and cats. So so sorry to hear of this horrible, disgusting, and senseless tragedy. My sympathies to her family, and to her friends like you, Sue. It was a shock to see this as front page news here today :(
Chris aka Lolita in Mtl

Thank you for the tribute to Renee.

Like you, I met her first on the message board. I had the honor of meeting her on Isla. She was a wonderful lady.

I was saddened to hear about her passing.

A beautiful tribute to a friend.

Thank you so much for honoring your friend. I just read on another blog about the murder but the blogger had no specific information. I am glad you let us all know what an amazing person Rene was. I know she will be greatly missed by her friends and the animal friends she helped and saved. Thanks

Thank you for putting a face, a voice and a personality to this tragedy. I did not know her but recognize her from your photo. I wish I had known her. I bet I would have liked her.

Thank you, a beautiful tribute, it sounds as though she was a woman who will be missed by many. I am sorry for the loss of your friend. May she rest in peace.

Sue - what a wonderful tribute you wrote. I'm sure Renee would be proud if she could read this. I so hate to hear about her death.

I appreciate all your comments and would like to get all of them to her family some how, although I'm not sure how. When things settle down I will see if Delfino can help.

My head has been whirling all these days since her murder. Deep sadness at the loss of her dreams and the circumstances of her death. I can only imagine what her family is going through. Or maybe I can't - it is too horrible to grasp.

She sounds like a lovely person. My condolences to her family.

Beautiful tribute! So sad! Hope we never get news like this again here on Isla!

this is so incredibly sad...i'm just learning of this now. what you wrote was so beautiful... i'm so sad and i didn't know her...but feel connected some how. isla will remember her.
meg (on la isla)

Just an update and a thanks. It's hard to comment on this, I know, but to those of you who did, I really appreciate it. Delfino told me that the family has seen this blog and all your comments. I know once things settle down for them that they'll reread everything that people have written and feel comforted knowing their mom was so special to so many.