As I head into my final month of work as I know it, I really need my computer to tie up multiple loose ends and hand-off some projects. If not for that, I would have thrown the computer from the highest point of the house today, gleefully watching it smash into hundreds of tiny pieces on the terrace below. Only for the sake of doing my job have I spent 4 hrs last night and ALL day/evening today trying to fix something that apparently started from something that seemed normal. Here's what happened:

We went to see the turtle release last night. I discovered a movie option on the camera (yeah!), so along with the pictures, I took some video (I think) of Miguel releasing his turtle. Here is the little cutie: 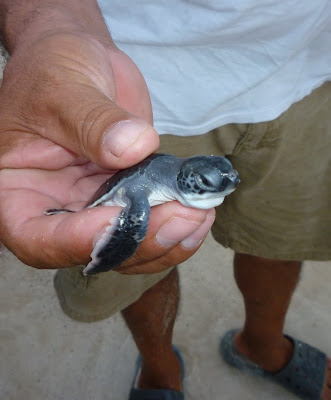 When I calm down I will post more pictures with a little blurb about our adventure - it was fun. When we got home I was anxious to see the pictures and movies. When I clicked on the movie, it brought up a message that I didn't have the correct version of QuickTime to play the movie, and it took me to a web page where I could download the software. While it was doing that, I tried to open the movie using RealPlayer, and got the exact same message, and a page where I could download that too.

I clicked on the download to install the new version and disaster struck. My system froze, and it has taken me 24 hrs to get my system back up and usable. I've fixed my registry, I've scanned for viruses, I've done hours of diagnostics, which tell me that I apparently have a bad hard drive (which is just 3 weeks old). I have backed up my files on a different drive than my usual one (in case a virus is lurking somewhere), but right now everything is working so I'm hoping it lasts for the next month. Then it won't matter, I can use any computer that has internet and will be fine.

Except Miguel's computer isn't an option - it is so slow it is worthless for anything I'd need it for. I did a scan on it today and found a trojan horse, so it got the works on cleanup. After running all day, it still has 50% to go with defragmenting.

When I finally got my computer stable enough to connect to the internet and read my email, I got news from my daughter...

Call the tax department, they want to ask you some questions about last year's taxes.

And by the way, you got called for jury duty.

And I got an invitation from a former guest to join him for some online dating (which I suspected was sent by a virus and did not react to - he later sent out a message to please ignore the email...).

And this news from Miguel...the used piece that was put into the golf cart the other day has already shorted out and we'll have to buy a new one, to the tune of $100.

About the time we went to see the turtles I broke out in a rash on the front of my chest, and now it's going around the back of my neck. It's itchy, I have no idea what it is.

I WAS having a great weekend.
Posted by Sue at 8:50 PM

Sounds like a togh day--it can only get better! Computer are great when they are working; but when they aren't it can be horrific! Glad there are solutions for the computer things....

I have a hunch your rash is due to stress! Really. Computers crashing, golf cart stalling. It's stress.
I had my annual golf cart rebuild Sunday. 1100 pesos for the oil gasket, brake line and one break shoe, frayed belt. I should be good for a few months before something else.

Sue, wonder if the rash could be an allergic reaction? (Maybe to your computer.) I just bought a huge tube of cortisone cream because my annual rash on my shoulders is back. It starts in early October and will last through December.

So sorry for your computer mess. I'm glad you have the knowledge to get it going again! (I don't!)

Computers and cars. Nice when they work properly, nightmare when they don't. I must say though, you were looking fine when I saw you Saturday! It was so nice to meet Miquel in person!

Ann - today was a good day, the computer worked just fine. I don't get it, I would not have said I found a solution, I think it fixed itself. Or maybe it got tired of all the reboots and diagnostics and decided to just behave itself.

Zina - I don't know about stress, the rash started before the stress. Loco seems to have a similar rash. It's raised, bumpy, with a white head in the center. And it's itchy. I'm forcing myself not to scratch but poor Loco is going nuts. I might end up bathing him tonight - he'll hate it but it might help the itch.

Beck - no idea what the rash is, it's weird. And I don't really know what I'm doing with the computer, but thankfully the internet is full of help. And of course, I've done this all before - I don't seem to have great luck with computers. Or golf carts either, I guess.

Wayne - it was nice to see you and for Miguel to finally meet you. And we went to try those burritos - mine was great. Miguel didn't order any 'sabor' so it was too bland for him, but the dogs liked it. I ordered chicken curry and it was really tasty, thanks for the tip!

WOW. The turtles sound like something fun but it certainly went downhill from there.

A red rash with hurtful white bumps in the middle. Do they look like pimples about to pop? Sounds like heat rash. Get some cortizone cream.

LOL on the jury duty Sue. There must be some kind of blitz on in St.Kitts.Frank had to go 2 wks ago and Friday his mom who is 88 got a notice to appear.