Been busy, family was here

In and out and about a lot more than usual, enjoying the family and not having to try to squeeze them in around work. We ate out a bit...

Rolandi's Pizza - everyone other than Miguel and I ordered pizza and all commented that it was not as good as usual. Something about the crust. Miguel had the fish ka-bob and he was very impressed, he loved it. I had the roasted chicken in juices and it was very good. A half chicken is too much for me so I shared it with the people who didn't eat their crust. The girls ordered potato soup as their appetizer, they are addicted to it. The highlight was all the waiters singing happy birthday to my daughter - they put all they have into it. 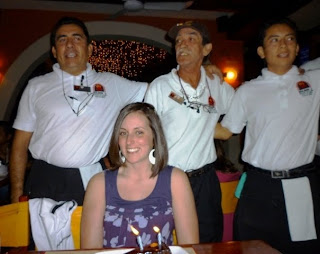 On Monday we went to Mango Cafe for the Jamaican BBQ, and we all enjoyed the huge meal and the hot chocolate at the end. The owners are very friendly and make time to chat with the guests, never appearing to rush anyone out even though there might be others waiting for a table.

La Bruja - great meal for everyone, as usual. I discovered that pico de gallo makes the chicken empanazada even better, will remember to order that on the side next time.

Mamma Rosa's - had read some good comments on one of the message forums, and some not so good ones on Trip Advisor (should have listened to the ones on Trip Advisor). The food was not bad, it just wasn't what we expected or are used to in Italian food. We did have fun sitting on the street and watching the action. First we had a mariachi play us a couple of songs, and during the second song, a pretty melodic love song, an older local gentleman, maybe a little tipsy or just nostalgic, stood beside my brother and sang along. The mariachi wasn't thrilled about it, but we enjoyed it and the old man talked about how nice the song was and then he went on his way. A bit later the bongo drummers started up at the corner, and we enjoyed that sound and some of the dancing that accompanied it. And finally Louie, the popcorn tricycle old guy came along and sat beside us. We bought popcorn, he showed us a print he carries around, and then his hidden bottle of beer tucked into the back fender of the bike. His toothless smile was priceless. Later we ran into him coming out of Hemmingway's bar - another beer to top off the night, I guess. Happy little man.

Cafe Mogagua - love the creme brulee and just sitting on the sofa and enjoying the pretty space. A belly dancer did her gig all around us, and although she was good, I wasn't sure it really fit with what we were looking for there. But we gave her a tip anyway, she has to make a living.

Bistro Francais - always good, always clean, and always great service. Don't expect tender beef unless you order the filet mignon, but it still tastes good and all the side on the plate, along with the rolls, make it a very nice dinner. Sometimes you just need a baked potato loaded with melted butter and sour cream, right?

We also ate chicken from the rosticeria and Familia Tomas. Miguel spices up the spaghetti sides and they are actually quite delicious then (otherwise the spaghetti is only good as filler, it has little taste).

My sister-in-law treated all us girls to home massages by Mary Ann, which makes it so much nicer to just wrap up in a robe and take a nap. The massages were great, as usual, and it was a great day for it as it was one of those all-day rainy days.

We went to Castilla de Garrafon on their last day, and it was just nice to sit near the shore and listen to the waves. There weren't many other people around at all so it felt like a private beach. I hope they never sell this property as I can just imagine a private hotel taking it over - it is one of the few places outside of town where one can just sit this close to the water and enjoy the pretty view of the bay. We saw some pretty fish - big blue ones that came into shallow water to feed. A nice family day.

Most mornings Miguel cooked breakfast and we devoured that along with a huge bowl of chopped fruit and glasses of fresh orange juice. Coffee up on the third-level terrace or on the front terrace was great. A couple days we sat on the pool terrace and enjoyed the beauty around us.

We picked up chicken salad on a croissant for lunch at Blue Iguana - it was pretty good. We also picked up pizza and a calzone at Milagro Pizza, and it was delicious, I could eat it every day. Guess living here has made me long for some of my normal food from my previous life. Not all the time, but sometimes, it's nice to go back to our roots.

So all the family is gone now - a trip that went by too fast for everyone, and too long before the next one. The weather was pretty cool and windy most days, they didn't get much pool time at all. But they made do, they had a good time despite the weather, and we look forward to 'next' time!

Update on the kittens...

The orange mauled kitten died on Friday morning, not of its injuries but from diarrhea caused by the bacteria in the dogs' mouths. It may be for the best, since it did have some brain damage, and I'm glad it died in the safety of the clinic and not through torture by dogs.

We found another kitten on the way to the clinic to see the orange kitten. It was just lying on the sidewalk, collapsed. We put it in a box and took it to Delfino, and were happy to see it drinking water when we left. Probably just a case of malnutrition and/or exhaustion as it did not appear to be injured. 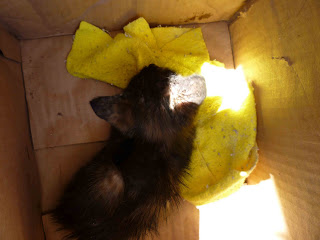 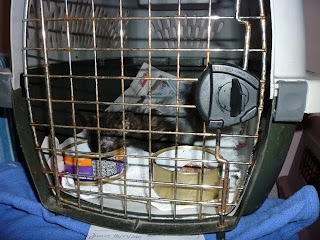 No sign of Velose when we were at the clinic. We hope she will either be happy living over there or will find her way back to us. She knows how to survive, she has been in the jungle from the time she was a wee baby. I would love to see her back here though - we sort of miss her little face looking in the screen door at us.
Posted by Sue at 7:06 PM

Ralph said that Mama Rose’s was really good. I haven’t tried them yet. Mama Rose’s is doing the food on the lower level of OM now. I heard good things about what they were doing there.

Bless you for rescuing the little black kitty and taking him to the doctor. Sorry to hear about the poor orange baby :-(

So sorry to hear about the orange kitten. Somebody needs to go slap that dog owner!