We waited six years for this

I'm not sure when this little cactus came to my house, I'm not even sure how it got here. But I do remember the last time it bloomed - November of 2003. Actually, it wasn't this cactus that bloomed all those years ago, this is the offspring of the one that bloomed.

The plant is of the Echinopsis cactus genus. I can't find anything on the web about how often they are supposed to flower, but I suspect ours is a late-bloomer.

Yesterday Miguel brought the plant down from the third-level terrace in anticipation of the flower opening. He placed the pot in a patch of sun, right in the area where Loco jumps at the iguana up on the wall. He shortened Loco's chain so he wouldn't break the flower. We laid in the hammock and waited. Nothing.

Eventually the sun moved so Miguel moved the plant again. All day we watched, but by 3 pm we were forced to go out, hoping the flower wouldn't open while we were gone. When we got back, the flower was still closed. Miguel moved the plant again, against the hedge, but by night-time he decided it was too risky as sometimes stray cats come in and that area is a preferred jumping spot. So the plant went up to the second-level terrace to spend the night.

There was a lot of noise in the middle of the night and Miguel got up to investigate. Once awake, he couldn't get back to sleep so he went downstairs and spent several hours on the computer and watching tv on the sofa, where he eventually fell back asleep. When I got up in the morning I forgot about the plant.

After our morning coffee, I told Miguel he should check on the plant, and sure enough, he came down with a flowering cactus plant in hand. There were black ants inside the flower, sort of like you see with peonies. There was a very mild sweet fragrance, probably what attracted the ants.

We sat in the hammocks and admired the flower until we got hungry enough for breakfast - we knew the flower would only last a matter of hours. 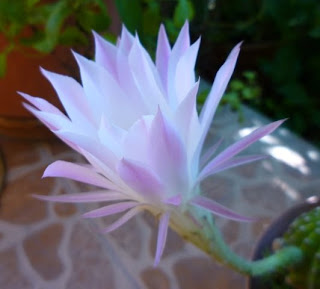 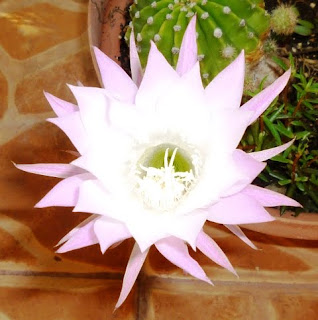 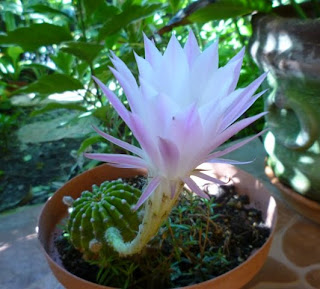 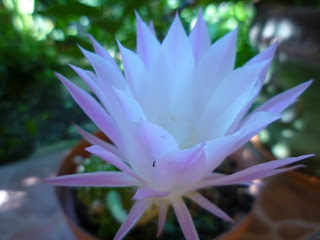 After breakfast the flower stem was wilted, and sure enough, when we got back from Cancun late this afternoon, the flower was done. Not quite as quickly as the fictional flower in the Dennis the Menace movie, where the plant only blooms after 40 years and the flower dies right after opening.

There are more buds so we expect more pretty flowers from this plant, and it already has some baby buds to take the place of the mother plant that will probably die once it has finished flowering.

I hope we don't have to wait another 6 years to enjoy the next group of flowers.
Posted by Sue at 10:02 PM

That's a beautiful bloom and to wait so long makes it even more special. Here's hoping you get a few more this year.

Absolutely beautiful Sue! It was worth the wait! : )

barb on the southshore of lake chapala

Beautiful pictures...I especially love the first and last ones. You really have a special guy there; love of nature and animals is a wonderful thing.

That is a very pretty bloom. Well worth the wait