Minina is home! Other than a swollen nose that is still making her sneeze a bit, she seems fine. She is confined to our bedroom to keep the other cats from pestering her and to keep her from being too active with the stairs and flying around looking for geckos. It seems nothing is broken (other than probably her nose) - she is one lucky cat.

Many thanks to Delfino for once again coming to our rescue with a pet emergency. I really don't know how he does it, there are so many animals at the clinic, he's always busy, and there are so many sad outcomes. Thankfully this was one of the happy endings.

And now...Introducing the Luna Studio! Part of Capi's Apartments, this studio is on the third level of Miguel's property. 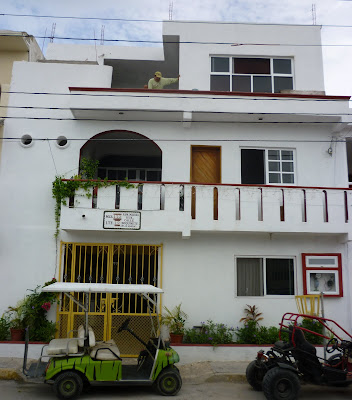 We've already had our first guest, even though we really weren't expecting to be ready until the end of the month. Here are pictures of the kitchen and bathroom, the two more labor-intensive rooms to get completed: 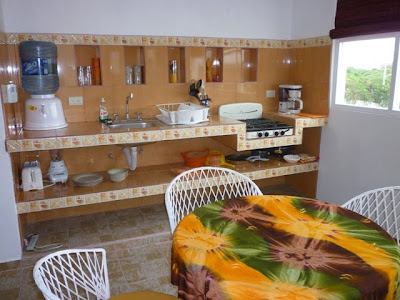 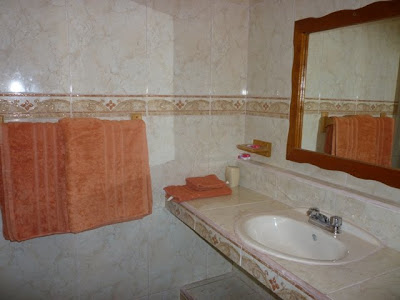 I wanted to take a picture of the bedroom too, but after I spent Friday evening putting what I thought was the finishing touches to the room, including hanging white curtains over the window, I discovered today that someone had taken down 3 of the six curtains and put two orange ones right in the center of the rod????? Goes really well with the nice sage duvet, I'll tell you. Whatever was whoever did that thinking? Miguel is so picky with what he does, I can't believe he would agree to such a ridiculous thing for the curtain. I know why it was done - to cover some windows down in the other apartment as there is a couple sleeping in the bed in the living room and the orange ones probably were too flimsy. But why put the orange ones up in the studio when there were already three other white curtains there? Now to figure out a way to get rid of the orange without offending him.

I also need to find something to put on the wall in the bedroom - it looks quite bare with just the white walls. Maybe I'll do something like I did in the Minina Suite last week?

Here is the picture of my solution to the lack of pictures in the Minina Suite: 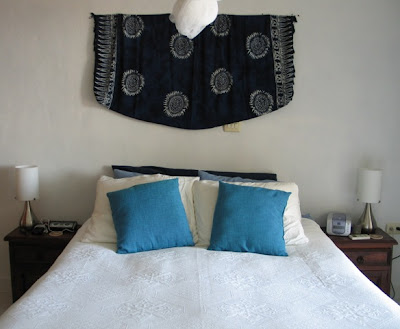 I need to do something to straighten the bottom hem, but that was one of those things on the job list that didn't get touched yesterday, and now I'm a day behind, so we'll see - probably after Christmas.

The last bit of news - Miguel won 10,000 pesos yesterday. Whew! We can pay the brick-layer and buy the rest of the floor tiles for the studio terrace. That guy has good luck. And of course La Bruja knew about it - he greeted Miguel at the market yesterday morning with "that was your number that hit". Yup, it was.  :-)
Posted by Sue at 12:46 PM

What great good luck! And he didn't let on when we saw him at the mercado today!

Great pictures of the new apartment. I LOVE the tile work!!

And congrats to Miquel on the win!

It all looks perfecta! MUY LINDA!!

Sue, Miguel must have an angel on his shoulder! The wall-hanging looks wonderful! I'd do something like that in the new Capi Apartment. (Maybe one with orange, white, and sage? Just kidding!) The new apartment looks wonderful!

Leave the wall hanging as it is. It looks like a Mexican kimono!

Does Miguel always play the same #s? I like the look of the new apartment, small but well arraigned kitchen.