Officer, a deer hit me

I did not hit the deer, it ran into my car. It hit ME.

I had just visited my car insurance agent in Niagara Falls to pick up the little pink slip you keep in the car to show that the car is insured. 10 minutes later I needed that little pink slip.

I had just driven over the Skyway bridge, and was starting down the exit ramp when a deer showed up in the middle of the highway, and suddenly it ran right at me. Instinctively I ducked, which may be what saved me.

The deer slammed hard into the driver's side, shattering the side window. Somehow I kept the car under control as something whacked me in the side of the head. When I looked up, I was still heading straight down the ramp. I glanced in the rear-view mirror and saw the deer struggling to get up, and finally it did get up. After that I don't know, because by then I was at the bottom of the ramp and had to merge into traffic.

I really didn't know what to do, there was nowhere to pull off, there was nothing I could do for the deer, and I just thought my window was broken. So I drove home, since I just live a few blocks from the exit.

I called Jen to come down and help me because I was covered in glass and really wasn't sure that I was ok. I guess I was a bit stunned, but I got out of the car and then we surveyed the damage. 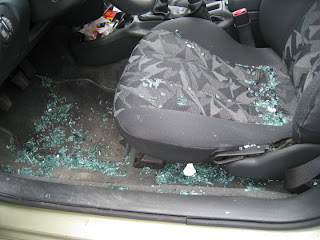 The entire driver's door was dented in, and the side-view mirror was gone. There was some blood on the frame of the door, but not much - I'm really hoping the deer somehow survived the impact and ran off. We found the side mirror on the floor of the passenger side - no idea how it got there, maybe that's what hit me in the head. Don't really know.

What did I do? I got the little pink slip and called my insurance company, and then the police. 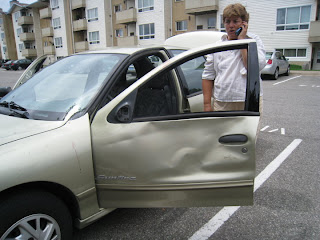 I brushed the glass off the seat and drove to the body shop. Then Jen drove me to the car rental agency. So I'm all set up with a nice new red Ford Focus. Very impressed with how quickly I got through the process - 3 hrs in total, the longest time was waiting for the police to come to my house.

Glad you are ok. hopefully the deer is ok. Even though you feel ok, you should go and get checked out. head injuries are nothing to put off. take care Sue

You were very lucky! If it had hit you head on, it would have been much worse! Glad all you had to do because of it went smoothly & quickly.

Thank God you are OK!

Sue, how frightening! So glad you're okay. I agree that a look-see by a doctor wouldn't hurt. Take care.

I agree with others about getting your head checked (no pun intended). I'm so glad you're okay. Sounds like the deer was just stunned and ran away. I know from living in Washington State what kind of damage a deer hit can do to cars and people!

Quite an impact!! Glad your ok. Sorry dinner ran away:-))
carl/debbie

Thanks, Everyone - I survived the night. Jen checked on me every two hours, as is 'head injury' protocol for the first 24 hrs. I checked my pupils - equal and reacting. I think I'm fine, but I do have some sore muscles so I guess my body got jolted when whatever hit me in the head must have hit my upper body too. A weird experience and I can't help but wonder how that poor deer is...which was one of Miguel's first questions too (both animal lovers here).

So sorry to hear about your accident -- and glad you are ok... I have the dubious honor of having hit more deer than anyone I know (5!!)though some of them did run into me... anyway, it's an awful experience, especially for those of us who would never purposely kill one...maybe yours survived...Hope you're safely home on Isla by now...and feeling better.

Charlotte, I think I even remember the last time you had a run-in with a deer. Don't remember the details though, but yeah - killing any animal is traumatic, before this I'd only ever hit one - a squirrel that ran out in front of me. I hope the deer survived too.

This happened to my husband a few years ago, but he was injured quite badly as he landed in a deep ditch as well. Mostly facial bone & mouth injuries (mandible fractured and many teeth broken).

It happened to my daughter a few WEEKS ago, but she was fine... didn't break the window on her, but did take off the mirror!

Glad you were not injured!!!

Actually, Ali hit the deer head-on, and it flipped & broke the windshield, causing him to loose control & land in the ditch.

A good reminder as I head out on the highways the next couple days! Deer are the Canada geese of mammals, no offeinse intened to Candadians!

Linda - that's what Ann was saying, it would have been worse if it had been head-on. I ready that 150 people in the US die every year in deer collisions. I feel lucky, that deer hit the side window right beside me like a big splat and it could have been bad since I was on a ramp with walls on both sides. Somehow I didn't lose control, have no idea how. Glad you husband and daughter are both ok, although your husband probably still has reminders of that deer.

Z - I always used to keep an eye out for deer, but just never thought about it at the place and time where this one was. You never know, so I hope you have safe travels.

Your lucky it wasn't worse.