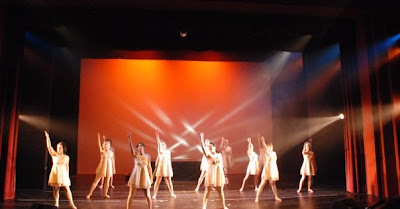 In the Olden Days I used to be a stage mom. My daughter, now 28 years old, started dancing at the age of 2. For a few years she took piano and tennis lessons too, until dancing became her clear passion.

I realized the piano lessons had to go as she was following in my footsteps - going from lesson to lesson, week to week, without touching the keyboard in between. I used to lie when my teacher asked me how much I'd practiced, but I'm sure she wasn't fooled one bit. I'm not sure how Jen's teacher handled it, it was a group lesson of 3 (the other two were really cute boys), and I don't think the boys worked any harder at learning to play than Jen.

She worked harder at tennis, simply because you have to practice with the teacher. And she became a good little tennis player, beating boys on a regular basis with her lobs and shots that took the pace off, and her patience. Most other players just wanted to win the point as quickly as possible, and so she forced them to make errors, and came out on top more often than not.

As she reached pre-teen, dancing consumed more and more of her after-school time. She was at the studio almost every day, learning jazz, tap, ballet, hip-hop, musical comedy, drama, lyrical. Jen was also a teacher of the younger dancers.

The studio began offering classes to adults, and so I started dancing as well. Good exercise and good fun. Until we learned we would have to do a number in Showcase, the yearly performance where parents got to see the results of the year's dance classes. I had never performed before, and it was scary to think about being up on stage in front of hundreds of people. But I did it, and had a lot of fun until work travel interfered with my ability to attend weekly classes. I still dream about finding a studio where I live so I can dance again.

Dress rehearsal day was a long one - morning to night as each number got at least two chances to run through - once individually to learn positioning and entrance onto the stage and to get a feel for the stage (some classes needed more than one run-through to get it right), and once at the end of the night as they did a full run-through of the show to fine-tune timing between numbers and costume changes. A group of us moms sat in the theater watching the studio Director leading her dancers through what would become a professional-quality performance. Not just a recital, but an entertaining show.

During dress rehearsal we fixed costumes, we folded programmes, and were just generally available to help in any manner. It was a day filled with tension as well as fun, and I looked forward to that day every year.

Of course, children grow up and so the day came that I no longer went to dress rehearsal. Jen's dad still goes, because he does the music. Incredibly, Jen has continued dancing with the same studio even though she moved to Toronto for a few years. Jen loved dancing, and especially dancing at that studio, enough to commute back and forth every week.

Last night was Showcase 2009. The studio is celebrating 29 years of teaching countless children the joy of dancing. Some, like me, began dancing as an adult - knowing we could never be as good as the 'kids', but still enjoying the process of learning to dance. And then some, like Jen, have dancing in their hearts and souls; it's a passion, and they have never stopped dancing.

I think we all could do with more dancing in our lives, so put on your dancing shoes and let's do the Hand Jive!
Posted by Sue at 8:14 AM

that 25 second video about wore my butt out!! and my cigarettes fell out of my shirt pocket!! you need to add a disclaimer to the video:-))
carl/debbie

Great post, Sue. Maybe you should join one of the Carnival dance groups on Isla? :-)

Sue, What dance studio did your daughter go to? My only child is a 34 yr old non-dancing boy. LOL I was an avid student at Patricia Brown Studio. I guess I missed the "St.Catharines is a dancing place" LOL I'm going to Google Showcase 2009. We VERY recently retired to Crystal Beach so we're not up on the news from the rest of Niagara.LOL

Carl - you have to stand up when you do it!

Vee - nah, that isn't my kind of dancing, and wearing all those fancy costumes - I'd be picking at them all the time.

Jeanie - it's Wendy Leard School of Dancing, in Niagara Falls. Wendy herself is a wonderful director, full of energy. She was the wife in the 'Master of the House' number the other night and was hilarious (the studio is not just dancing, it's performing so they learn musical comedy as well). Another adult number, 'Dancing Queen' had everyone cheering. Made me want to be up there on stage with them, they were just having too much fun.

Sue, I'm amazed! I've always wished I could dance. It's cool that your daughter is still passionate and involved with it. My son's big passion was golf and he's found a way to make a living using it. I was his driver for a lot of years. I played as a kid, but it hurts my shoulders and elbows too much now. And I second Vee's idea! : )