So what to do during a tropical depression?

We knew there was a depression heading our way, and early yesterday morning we had a heavy rain. But then the rain stopped, and we were left with overcast skies and a nice cool breeze. Not bad, really.

By midday I was thinking we had escaped the tropical depression. I took a nap, and when Miguel came home, he took one too. Around 5 pm it poured again, and I got up to watch the rain.

The animals have a way of being where we are. Loco was under the bed and he stayed there in the bedroom with Miguel.

Luna was outside somewhere, she seems to have a secret shelter somewhere. The other three cats were wandering around but as soon as I sat on the couch to use the laptop, they decided they wanted to be on the couch too.

Maya made herself comfortable in Miguel's usual spot, and Smokey joined her. Minina snuggled in beside me.

It didn't take long for Smokey to start poking at Maya, and then the two of them hit and bit and wrestled on the couch. 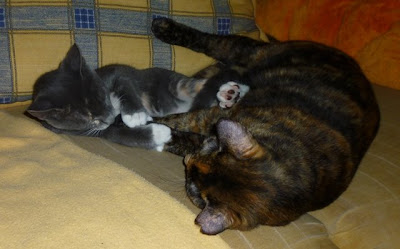 As Minina and I watched the two cats go at it, I thought of my brother and sister. As kids, they were always annoying each other, and on car trips I had to sit in the middle to stop them from fighting. 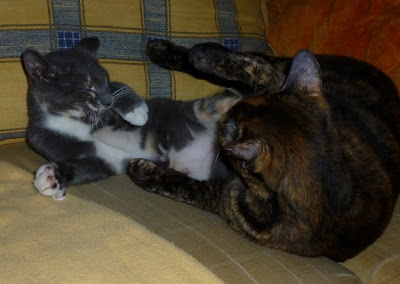 I wondered how long they would keep it up. 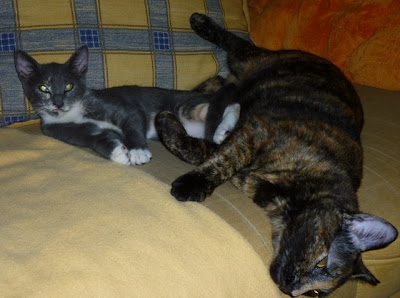 I guess the answer was...until Maya gave in and Smokey got the space all to herself. 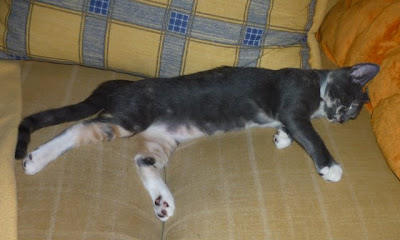 Minina grew bored watching her 'sisters' annoy each other, and spotted a baby gecko on the ceiling. She amused herself with staring at the gecko, willing it to come lower so she could catch it. 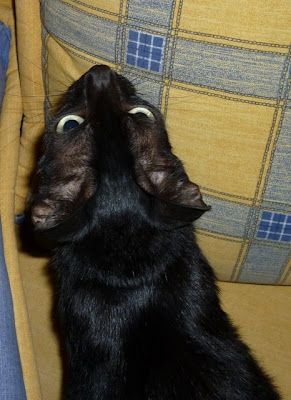 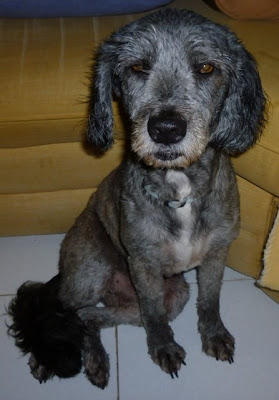 That photo of Loco is just priceless! And growing up, my brother and I didn't have anyone to sit between us in the back seat, so you can only imagine! Love all the kitty photos too! All the news up here is Michael and Iran, so I hadn't heard about the tropical depression. Hopefully, it will move on quickly!

Wow, talk about being in the dark. I didn't even know there was a TD out there. I have not turned on the TV since I got home. Guess I might want to watch it sometime huh?

I feel for poor Loco - Sam doesn't go willingly into the rain! The environment in the Gulf doesn't look supportive for this storm to develop...but,it looks like the Hurricane season is about to crank up...stay safe, Sue!

Sounds like at our house, too! Except the dog weighs 100 lbs. & can't get under much of anything....he tends to go curl up in the laundry room--very sheltered!

It's amazing how the littlest ones win the game. I think it's because they can annoy FOREVER. LOL
What a great shot of LOCO!!!

It was comforting to have Ana for a visit, the dress rehearsal BET should have had before the show, just to make sure all systems were go.
The week before, I bought some, not enough for anything serious anyway, generator gasoline, just like your other gasoline. And I had "provisions" as one would get when reports of the blizzard in Kansas start getting reported in Ohio. It made for some great eating, though. A broccoli I bought to add to green salads and steam and freeze the rest, became a cheese stuffed broccili, wedges of white cheddar cheese between the stalks, battered and fried like a chile relleno. Topped with canned Campbell's Turkey Gravy with canned mushrooms added. Some grated cheese in leftover egg wash WITH flour in it as a souffle on the side. It turned out more like a cheese cookie, but was great...with a little red salsa...
Lora, a rescue dog, won't go out to pee in rains either. Lluviando, I say earnestly. She checks both doors to make sure it's raining over there, too! And then just sucks up affection. Was that thunder?

Loco looks so sad .. and so adorable. Love the pictures of the cats. Thanks for sharing.

So Beck, seems that we're not from the same family afterall - I had two siblings. Did your father ever threaten to stop the car and leave you both at the side of the road? Mine did...

Bennie - you are so busy being a good farmer that you are not keeping up with the world these days. So unlike you!

Ann - that is one big dog! I can't recall seeing a picture of him - is one on your blog?

Jeanie - you got it - the little ones just keep on pestering until they get their way. Too funny!

Zina - I think it was thunder! And you never know, it can rain on one side and not the other. Lora knows.

That photo of Loco is priceless! You can see very plainly on her face how she felt about going out in the rain!

My Charlie will NOT go out in the rain, ESPECIALLY if it's thundering! (even softly in the distance) I dragged him out in a misting rain once, but he wouldn't go more than 3 feet beyond the door, and refused to even TRY to pee, tugging on the leash to go back in. He waited over 12 hours until the next morning!