I hear what you're saying - you like animal stories, and you like pictures. Ok, here you go...

Loco is an only dog right now, as Blacky is still staying around the corner with the neighbors. Loco likes being the only dog, he doesn't have to share the terrace and he gets to be the hero if he barks at strangers.

Two of our cats think Loco is just the best. Minina, our little black cat, spends most of her days out on the back terrace. Sometimes Loco wants to go out there to soak up the sun, and when he shows up, Minina runs right over to him and starts rubbing against him and rolling on the ground at his feet. She licks his ears and grabs his head and peeps at him (Minina has a tiny voice, she doesn't meow, she peeps - 'meep, meep'). Her entire body language says that she worships him (which isn't really true), and she is so happy to see him. Why? I don't know. Inside the house she hardly gives him the time of day.

Loco has been spending more and more time out on the front terrace, which means that Maya doesn't get to see much of him. Maya was raised by Loco, she was only 3 weeks old when we found her and from the first minute she was here Loco had a strange fascination for her. When she was tiny she would spend a lot of time lying up on his body, but now she's too big and heavy. And Loco seems to have lost interest in her - he doesn't give her the time of day, but Maya keeps trying.

Wherever Loco lies, Maya is right there beside him. Under the bed, under the coffee table, along the sofa. She rolls around, licks his feet, chews on his lips, and nibbles his ears. Loco tolerates it for a while, and he won't let any of the other cats hang around him like he does Maya. But finally even he has had enough, so then he just gets up and moves. And Maya follows. Maya wants to be with her dog. 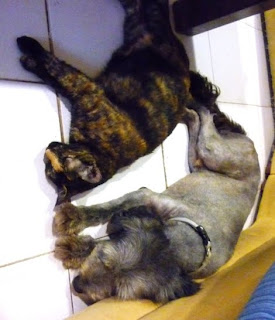 And then there is Cappuchina, the 'only' cat in the sense that none of the other cats accept her so she spends a lot of time on the floor being submissive to all the rest. But she finds her spots of comfort, and seems content despite the hostile environment: 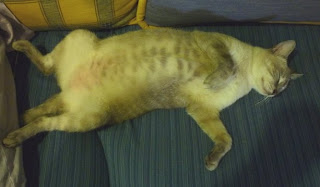 I love your animal stories! Since we are down to 1 cat & 1 dog, it's great to hear about more! Keep them coming!

I love your stories too.
We used to have three cats and one meek black lab. All the cats got along well with the dog, but not with each other. Only one left now, a little calico who used to attack her weird half-blind mother and slap the oldest and prettiest cat when it whined too much.

What an entertaining household you have!

That's what you'd call a "contented Cappuchina". Thanks for the update and pictures.

Oh thanks for the update and the pictures! Love the animal stories!

Don't you just love some of the positions animals get themselves into!

Thanks, everyone - I knew you were looking for more animals pictures!