What a difference a curtain makes!

When I bought my house here, it was just one level, and quite unfinished other than tiled floors and roughed in bathroom and kitchen. The 'master' bedroom was small, and the guest room was even smaller (one of the reasons I built up).

The master bedroom is at the front of the house, and at the time I bought the house, there were no streetlights, no paved roads, no neighbors, no hedges, no front terraces, no walls - nothing to make anyone feel secure sleeping where the window could be viewed from near and far (relatively speaking).

The window was arched, and the arch was at the middle of the wall...too low to leave uncovered. I wondered how to hang curtains for privacy without losing the arch effect. I finally went for floor to ceiling lined curtains, figuring when the curtain was pulled back, the arched window would show its beauty. The curtain material was bought in Cancun and was full of colorful stripes that made the room look a little like a circus tent or a stage. When you wanted to pull the curtain shut, you had to wind up because it was heavy. But it served its purpose, it provided privacy.

Well, now we have a front terrace and a high, dense hedge that blocks out any chance that someone can see us from outside. We don't really need a stage curtain, and I've come to hate it. So yesterday I got the ladder and took down the curtain and put up a half curtain from a couple of white panels I found up in Jen's upper closet when I was looking for something else. I have no idea how long those curtains were there or when I put them there - they were still in the package but showed signs of humidity. But a wash on the gentle cycle and a dry in the sun and wind make them good as new again.

Of course I didn't really have a rod, but I had one of those spring-loaded shower curtain rods, and although it sprung open and fell off more times that I can remember, I finally got it to stay in the window. The curtains are too long so rather than hem them, I just folded them over the rod (which sprung open a few more times while I fussed to get them even).

While I was at it, I cleaned everything in the room and rearranged the bed. I hate the wall - it's rough concrete and gives abrasions if you touch it. Not the best material to have on a bedroom wall, in my opinion, and one day when I can face the mess it will make (and I have the cash), that wall will be smoothed out and given a fresh coat of paint in a pretty color rather than the drab grey.

Once I was done I stood back and was amazed at how nice the room looks compared to how it looked before. Since I don't have a 'before' picture handy, you'll just have to imagine it, but here's the finished result - and the only thing different is the curtain. 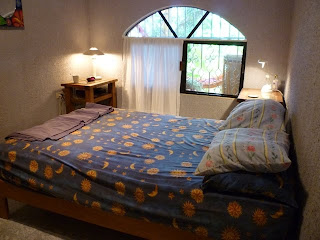 It looks fab Sue! BTW I just got 1600 thread count sheets at the Friendship Festival $20 king.

It looks good Sue and you didn't even have to spend any money.

Wait... 1600 thread count sheets??? Here in Mexico?? I don't even care what state but, here in Mexico you got those sheets for $20? Oh, wait, $20 dollars no doubt and not in Mexico. Oh, be still my heart. I can get so excited by good sheets that it is scandalous.

Jeanie - that is an incredible price, I'm not even sure I've ever felt 1600 thread count.

Beck, Jackie and K - thanks, I'll like it better when it has a new wall, but for now I can look past that.

Jonna - Jeanie lives in Canada, near where I'm from, actually. Yes, it's $20 (probably Canadian), but still - darn good price! I love good sheets too, they feel so great to slide into bed with.

Just my two cents . . . room looks serene and the window a bit romantic. You did good.

I enjoyed that post Sue, I remember so well when you bought that (then) little house! The window with the *new* curtains looks great.

Jeanie....have you looked at those sheets yet? Are they tissue paper thin? We bought some high count, cheap priced sheets one year at a State Fair, you could literally see thru them, LOL!