Jorge, our primary albanil, is of Mayan descent. His body has the typical physical characteristics of many of the Mayan people living here. He's short, with a round face and large head. He's not quite as beautiful as this young Mayan girl but he has a strong body from years of hard labor. He's respectful and honest, and family is very important to him.

A couple of months ago Jorge was hired to build a small breakfast bar on the edge of the second-floor landing. Part of the design was incorporating the base of the bar into the existing cement ledge on the outer staircase. Cement work is done in layers, the rough stuff first, and finally the smooth finish. Jorge was working on the smooth finish when I went to Cancun one day to buy more tiles.

When I got back Miguel informed me that Jorge had fallen off the top of the stairs, and had gone to get checked out. He said he'd been reading his newspaper in the hammock when there was a loud crash at the back, but he ignored it thinking a tool or something had fallen. Well, something HAD fallen, but it was a human - Jorge. The height of the staircase to the second level is 3 metres (9 feet). After falling head-first, Jorge managed to pick himself up and get on his moped and drive away.

I was so worried about Jorge, but there was nothing to do but wait for news. About an hour later Jorge came back...walking stiffly and grinning sheepishly. I was so happy to see that he was apparently ok. "What happened?", I asked. Jorge said he didn't really know, he didn't remember feeling dizzy or anything. He had been leaning over the edge of the stairs to put the smooth finish on the outside of the bar when he fell, head first. There was nothing to break his fall other than the fact that his butt caught the edge of a step on his way down, and that was enough to help him land on something other than his head.

Anyone who has watched an albanil perched up on a rickety platform or walking along the edge of a ledge or working on the top of buildings with no safety gear, knows that these guys have incredible balance and strength. Jorge simply lost his balance. Miguel explained it this way...

The Mayan people have big heads, heavy heads. He said that he was told that there are no balconies in the Yucatan because people leaning over the edge would fall, being put off balance by their heads. He said that he always thought this was just a joke, but it must be true because that's what happened to Jorge - his head put him off-balance and he fell. A very experienced albanil took a tumble because of his head.

Well, I doubt the truth in any of that, but Jorge seemed to think it was a possibility, and he does have a big head. And other than some sore muscles and deep bruises in the butt area, Jorge was fine and continued his work. These guys are tough, I give them my full respect.

So...getting to the point of the story. As posted several days ago, our new little kitten has a head that is out of proportion to its body. Our kitten has not yet grown into its head. Today she was leaning over the edge of the couch and Miguel warned her to be careful or her head would make her fall. I was immediately reminded of Jorge's accident, and the name Maya just popped into my head. It was one of those moments when you know it is right. So our little kitten, who was found in the jungle of the Maya, the land of the Aluxes (the plants across the road), will be called "Maya". 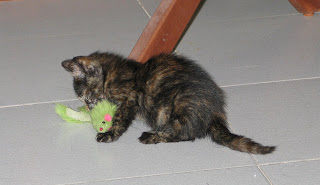 That's perfect! Thnaks for the story & explanation, too!

I can't tell you how many times I have just stopped walking so I could watch the workers at a construction site. It is just amazing the risks they take. I think the only construction site I have seen hard hats worn at is the condo development across from Jax.
What a purrfect name for your little kitty.

Perfect name for the kitty! I don't believe the big head theory for a second though. In fact, it's a bit derogatory to a people already suffering from many prejudices. (gently stepping off the soapbox so as not to fall)

Sue, you have such a talent for just throwing out the greatest lines! I love shopping so long your toenails grew! Great, just great!

The name Maya is a keeper, fits her perfectly.

And Wayne, I know where you're coming from, I hesitated to post the story for that reason - as the last thing I would want to do is belittle any race/culture. But I decided I was just repeating a story that the Mexican people themselves tell with humor and hoped people would take it that way and know it was not intended to offend. But if it did offend anyone, please accept my apologies.

Maya is such a cutie!
More kitten photos please!
And if you need to include photos of Minina and Loco et al to keep peace in your animal family, I bet there are very few objections amongst your fervid and faithful regular readers!

See you in about six weeks!