This is not the story of the shoes 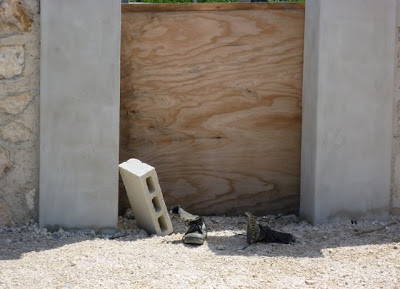 It's not the story because I don't know the story.

The picture shows a pair of shoes that were sitting in front of the entrance to a piece of land beside the gas station on the west side. I first noticed the shoes in April, and I wondered how long they would stay there before someone took them.

We passed the shoes almost every day, and they just sat there. Who just stepped out of their shoes and parked them there at the entrance? Did they forget the shoes? Did they have another pair and just discarded the shoes? Didn't anyone else need the shoes? Looking at the shoes became a part of our drive-by routine as we cruised down the west side. Seeing the shoes sitting there made us chuckle, and we kept saying that we needed to remember the camera so we could take a picture.

One day last week we remembered the camera. The shoes were tipped over, and so we stopped and Miguel put the shoes right. I took the picture just before he 'fixed' the shoes and intended to take the 'after' shot. But as it turned out, we stopped traffic in both directions by pulling over to the side of the road to take pictures of the shoes, so we had to pull out in a hurry and I didn't get the shot.

And now, after at least two months, the shoes have disappeared. Just like that, they're gone. And I wonder what happened to them. After all this time, we sort of got used to looking for the shoes.

And now I'm thinking...it doesn't say much for our life that a pair of shoes should amuse us. We probably need to get out more, and I don't mean for a drive around the island!
Posted by Sue at 7:00 AM

The shoes must have been well-used to have lingered so long! I've had 'magic' shoes at the beach and back door on Isla that have walked away within a few hours! : )

LOL! I laughed out loud at this post. I drive by there almost daily and never even noticed the shoes. Of course, I think I am going a little faster than you and usually watching traffic very carefully. People just dart out of that gas station without looking.

The next mystery you can focus on is where do all those single shoes come from on the beach?

The magic of marketing! Once Miguel set them up neatly they became desirable, you think?

I always wonder about all the shoes that come ashore in the tide. How could so many people lose their shoes overboard?

Now you will be looking a people's feet to see who is wearing the shoes. So funny!

Beck - that is why I was surprised that the shoes didn't disappear - they seemed like they'd serve someone. Guess not.

Wayne - you never saw the shoes?! And yeah, where DO all those single shoes come from?

Jonna - I wondered about that myself, if setting them up made them more attractive. On display, so to speak. And I can tell you one story about how shoes end up overboard - maybe will have to be in a blog though, as it's a long one.

K - I think I've detached from the shoes now, it's been a few days since I saw them, not sure I'd recognize them now...lol.

Sue, this was hysterical. I often see a single shoe in the road and wonder what happened to the other shoe. Funny how they sat there for two months and then one day just walked off.
Actually it does say a lot about your life. It says that you are very observant and inquisitive.

Jackie - we wonder about those single shoes too. I can see why nobody picks them up, although I'm sure with enough of them, something would match up enough to be useful. Thanks for seeing the positive side of our quirky life (you're right).