Just a couple of our recent issues

To live here successfully I think you have to be a bit of a problem-solver. An out-of-the-box thinker, coming up with solutions to problems that you would normally not even be facing.

My new stackable washer/dryer is mostly installed - we're just waiting for the gas tank to be filled now, and from the way gas tanks get filled here, we could be waiting a while yet.

Anyway, eager to try the new washer, I put in a load of whites and pulled the dial. Water started to fill the tub. I walked away to do something else, and when I went back (30 minutes later), I found the washer still trying to fill the tub but all the water just running out the back drain. Hmmmm...

Maybe we need to use the bomba, our water pressure pump up on the roof. This device ensures good pressure throughout the house, and even though the water flowing into the washer looked more than adequate, we decided we needed to use the pump.

Jump forward a few days, after I've done a few more loads, seemingly successfully using the pump. Same darn problem, but this time the pump was on. So why did the washer think it should just let the water run out rather than fill the tub?

Maybe the internet would be able to help me. I searched on draining problems for the type of machine I had, and found nothing of use other than the installation manual. I read the manual, and it stated that the hoses into the washer must not be longer than 42". Well, due to the location of the pipes in the laundry room, Miguel had rigged up extensions to the hoses. Was that the problem? The hoses were too long and the pressure dropped as the water passed through the hoses? We discussed this and Miguel decided he would move the taps, even though the water flowing into the tub, even on just gravity pressure, seemed very adequate.

We're on our third day now and the machine is working normally. Fingers crossed that was the problem because if so, it will save electricity because we won't be using the water pump. We also won't have to use the water from our tanks (which is required when we turn on the pump), we can use the water coming directly from the street flowing down from the second floor via gravity. Seems like we can keep our hose extensions, and just use street pressure water, and all will be well. We'll see. 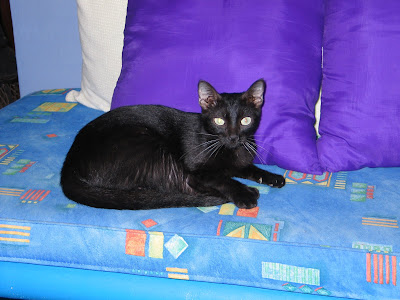 Is this also Minina? 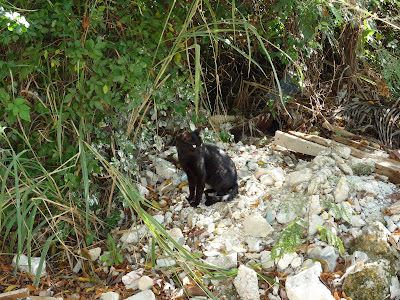 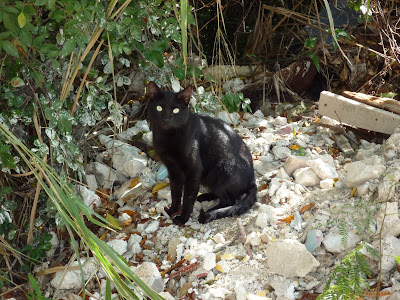 Answer: Just the first one is Minina, the other one is the Minina look-alike that lives in the plants across the road. I still can't tell them apart unless one looks me square in the face, and then I can see that the cat in the plants has a wider face than my delicate Minina.

I have no idea if the black cat is male or female, but the grey baby cat (now about 5 months old, and male), is usually hanging out with the black cat. Mother and son? Father and son? Don't know, but they are now used to me putting some food out for them, and so they are less shy and the black cat will call me when it sees me. There is another adult grey cat that sometimes joins this little family - clearly a male and probably the father of the baby. Logical deduction dictates that the black cat is the mom; I'm waiting to get a good look at the back end to determine the sex of the cat. Or maybe, since I haven't noticed the sex, I should assume it's female? Yeah, I think I'll go with that.
Posted by Sue at 12:04 PM

Sue, I think I would be SOL in Mexico because I'm a mechanical idiot. Seriously! (But I do know how to stop the water from overflowing the toilet.) I wonder if the Minina look-alike is a sister. I'm glad you're feeding the little family.

Beautiful cats! I'm with Becky--I'm not real handy around the house--and neither is Alan! Good luck with keeping everything working right.