What are they doing?

What is Miguel doing? 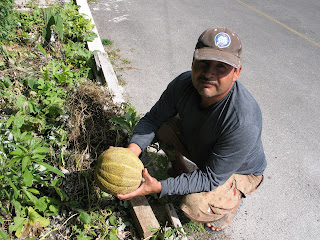 He's picking his monster melon that he has been growing for weeks (we can't really remember when the plant first set fruit). The melon weighed 2.5 kg (about 5.5 lbs), and yup - we ate it. It was not as sweet as the last one he grew - maybe because it wasn't exposed to much sunlight? Does anyone know if direct sun makes a difference in sweetness?

What is Loco doing? 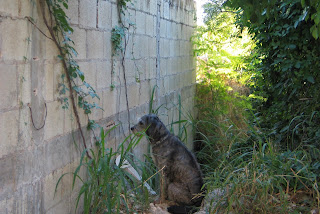 No, he wasn't sent to sit in the corner for bad behavior (at least not this time). Loco is staring at the wall, because inside is an iguana, and he can smell it and hear it moving about, and he's waiting. Because Loco is convinced he will catch this iguana one day. He thinks the iguana will either be stupid enough to fall down, or climb down to his height, or that he can jump as high as the top of the wall. Loco never runs out of patience watching and waiting for iguanas.

What is Maya doing? 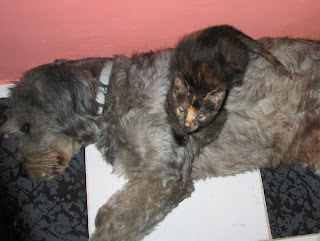 Maya is making herself comfortable on top of Loco's body. She seems to love his soft fur and body warmth, and he tolerates her most of the time. 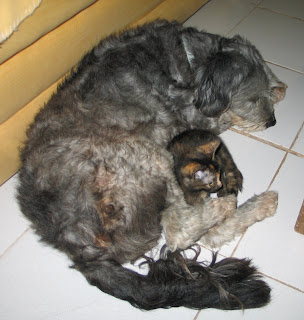 Pictures I'm waiting to get...

The two baby grey kittens that have been living in the plants on this road. They are probably 3-4 months old now, but still hang together most of the time. The Minina look-alike seems to be their protector - big brother, cousin, father - don't really know his/her role, he might even be an opportunist since the babies do the crying to get fed (and it works), and he gets to eat too.

The babies are often hanging around in our garden - they are safe there although Negra will chase them if they dare come near her food dish. And Luna growls at them, she's letting them know that she was here first so they either accept her position as boss or move along. Since they know they'll be fed, they're not inclined to move along, and that's ok - they are no trouble, and at least they get a good meal every day. Maybe one day we can catch them and have them neutered - they don't seem that wild although I still can't get close enough to touch them. But they sit and stare at me and don't run off, so they are getting used to being spoken to and they know we feed them. Hunger seems to override fear, so there's hope we'll catch them one day. But I need a picture - they are so cute!

Sue, all the animal pictures are so cute! Loco? Well Loco looks loco staring at the wall, but our Saby now stands at the window whining and throwing fits when she sees a pigeon on the roof!It used to be squirrels back in Washington State. Thanks for another great story!

Yes, I think sun makes melons sweeter. But in Mexico, they say, a stolen melon is even sweeter, so Miguel was wise to camo it!
Lora has a spot she stares at in the house. When I first got her, she would peel the paint off it. Now she just stares. I think it's a gecko home!

Hi Sue, I found your blog via Beck and I love your stories and your furry family. I just read on Doogan's blog that you are from St.Catharines.....ME TOO!!!LOL! I would love to know a little about your life here. Jeanie

Sue, I love the pics and the photos of Loco and Maya are priceless! I am looking forward to more stories about the two kittens and hoping you get that photo!

I grew a couple of melons in my back yard here in Dallas a few years back...lots of sun but not much taste...I figured it was my "black thumb" (which is the opposite of a "green thumb"