As you can probably tell by now, our non-working lives mostly center around a couple of things - our home/garden and our mascotas (pets).

The garden belongs to Miguel. Not that I don't love to garden, I do, but right now I don't have the time. And I fear that when I do have the time, Miguel will not welcome my contributions anyway. He's very tuned into each plant - are they happy, do they need a little TLC, are they simply not going to make it? Some will be having babies, some are seeding, some about to present flowers, some need trimming, some need repotting, some need more soil. This one needs more sun, that one more shade. Several times he has noticed that two plants living side by side are not happy with each other, like a bad marriage, and need to be separated. 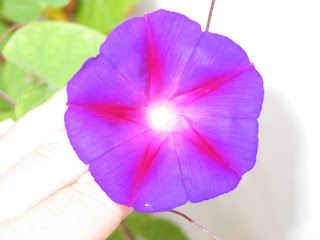 The morning glory got revenge though, because the cocoa palm ended up getting sick and after 5 years in the garden, it died.

Last year Miguel had a horrible accident (almost electrocuted), and was badly burned. He was in hospital for more than two weeks, and even when he came home, he was confined to the bedroom (in order to avoid infection). His hands were bandaged and he could not do anything for himself. However, somehow he found a way to hold onto a hose, and each morning he covered up and went out to water his plants - his babies needed him.

Despite losing a small piece of his 'green' thumb (cooked from the electrical burn), Miguel's garden has yielded watermelon and cantaloup from kitchen scraps, and radishes from a seed packet. 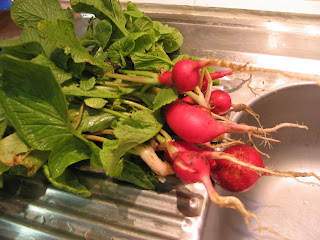 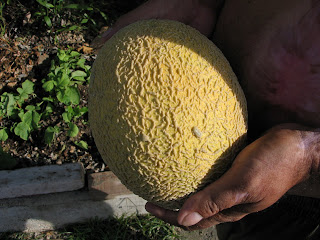 On second thought, since Miguel gets results like this, maybe I'd just better lie in the hammock and watch him work.
Posted by Sue at 7:49 AM

I am sorry you were not at your house in April when Denise, Ralph and I drove by. I would have loved to have seen your garden and the addition to the house. I know the last time I was at your house the construction to add the third floor was in progress. We talked with Miguel for awhile and he showed us the house next door. Maybe I will see yo the next time I am on Isla after Christmas.
Keep up the great writing. I am really enjoying your blog.