Mmmm, what IS that you're wearing?

Minina loves Loco but she doesn't like how he smells. If Minina is lying on the couch and Loco comes close and nuzzles her, she takes one whiff and moves away. Occasionally she will grab his head and give his ears a few licks (like she used to do with her late brother), but then she decides he doesn't taste good either and she pushes him away.

Loco must also have doggy breath because Minina won't play with her toys after Loco has chewed on them and left them lying soggy on the floor.

Recently Loco got his hair cut. The groomer (Alfredo) comes to the house - all we provide is the table and the dog. While Alfredo is setting up Loco has a mad look on his face. He knows what's coming, and he's going to do his best to get out of it.

But Alfredo knows the drill, and soon Loco is up on the table and the clippers are humming. Then comes the pedicure (nail clipping). Then the shampoo - the part Loco hates the most. This picture, although not taken during a bath session, still shows the distaste Loco has for being wet... 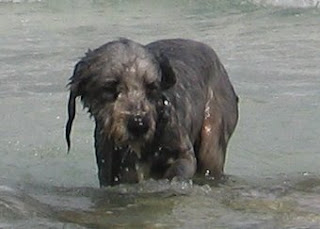 After the shampoo, Alfredo sprays Loco with some poofy cologne. Loco smells pretty good for a while - like maybe one day.

I didn't pay attention the last time Alfredo sprayed Loco but he must have used a different cologne because Minina suddenly found Loco irresistable. Loco was on the floor and Minina was rolling all around him. Sniffing him and licking his fur. Grabbing his head and pulling him closer. Flirting with him.

Unfortunately I didn't get to stay around to see what transpired next as I had an airplane to catch. But whatever pheromes were in that cologne have clearly worn off because Minina is once again showing signs that she thinks Loco stinks. The short love affair is over, until Alfredo's next visit.
Posted by Sue at 6:22 AM

Great story--don't you just love all the drama & hijinks our pets provide?