Negra came to us as an stray - abandoned by her owner who used to live down the road. Negra is a great watchdog, even if she isn't quite sure which people are the good guys and which are the bad guys. She barks at anyone who dares to come near the gate, and even workers who know her are hesitant to enter the property unless we are there to assure her it's ok. 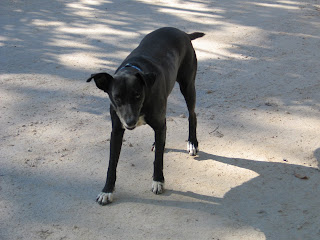 Negra sleeps on the front terrace, in a cozy corner with her IKEA pad. She normally sleeps quietly all night, and doesn't even bother to chase away stray cats. Friday night she barked a couple of times - unusual. She was carrying on like there was something we should check out so we got up and looked but didn't see anything.

The next morning we headed out to run some errands. After we stopped in the colonia to pick up something, the golf cart wouldn't start. We figured it was the accelerator cable, so lifted the seat to give it a helping hand.

It was then that I spotted the gas cap lying on top of the tank. The tank was bone dry. We'd had visitors in the night - someone who had the nerve to steal gas from the golf cart that was parked right under the street lamp across from the house. Negra had tried to tell us, but the bandito was too fast for us and made his escape. I'm not sure that Negra's barking scared him off - I hope so.

This was about the fourth time (that we know of), in the last several years; the first time in at least a year. Is the cost of gas causing people to start stealing again? I don't know the 'why', but I do know that we had very little gas to start with, so they didn't get much, if anything. We foiled the bandidos for a change!
Posted by Sue at 6:58 AM

Well at least they left you the cap to the gas tank this time. I know you used a water bottle cap for a long time. Again, you get creative in Mexico.

I had some bandito's at the house and my cat Pez tried to warn me. We had some fresh pears and we put them on the back porch so the fruit flies would not be in the house. In the middle of the night Pez went nuts downstairs. Of course our reaction was to yell out to her to knock it off. The next morning we discovered all our pears had been sampled by a racoon.

So I guess the message is to listen to our four legged family.

Yes, I did use a water bottle cap for a while - one I scrounged from the 'side of the road'.

Poor Pez, she was just trying to do her job. Next time listen!