Guess what? We're doing ANOTHER project that involves concrete. This time it's a small garden at the back of the house, where the plants there have outgrown their pots. As Miguel says, the plants are suffering just like I would if I tried to stuff my feet into shoes much too small. 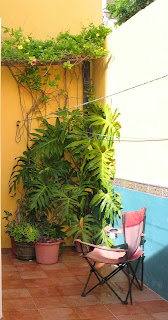 The plants need room to stretch their 'feet' in order to be happy and healthy. And so, despite my earlier promise to avoid concrete at all costs, here we go again.

Yesterday, the master albanil (cement mason) came to discuss the plan with Miguel. They drew straight lines, which meant the garden would be square, but the wall would be off from the tiles, which apparently are crooked. I opted to make the wall straight with the tiles, figuring once the plants are in place, the eye will not notice an inch or so more on one end as much as it would notice a wall mis-aligned with the tiles.

It took most of the day for the junior albanil (nicknamed Cilantro - don't ask me why, I think it has to do with the green shirt he often wears) to break up the patio tiles and concrete where the small garden will go. Fortunately he was able to use a cutter to make his line through the tile, so the adjoining tiles stayed intact. However, he had to use his pounder/battering rod to break up the concrete underneath - not sure what it is really called, but it's a long heavy metal rod (about 5' in length) that he slams into the concrete until it's all busted up. Concrete structures carry noise quite well, so the echo made it sound like he was tearing down the house.

Cilantro has worked here before, and I like how he cleans up after making a mess. We left him at his work to go out to eat, returning to find the area prepared for the next phase, and the mess all swept up.

This morning Miguel eased the plants out of their too-small shoes. Not an easy feat as they are vines and couldn't just be turned upside down and dumped out. But he managed somehow, and now the plants are sitting there, all in a row, waiting for their new wall to be built. Like an audience, anxiously waiting for the performance to begin.
Posted by Sue at 8:08 AM

I bet those plants sighed a sigh of relief when they got those toes out of those tiny little shoes.

I bet those vines will be beautiful when the plants get adjusted.

Bennie - those poor plants are looking quite sad at the moment, I think Miguel took off their shoes too soon (the workers were off for a couple of days). I hope they recover, I gave them a long watering last evening.