The Miracle of Libertad 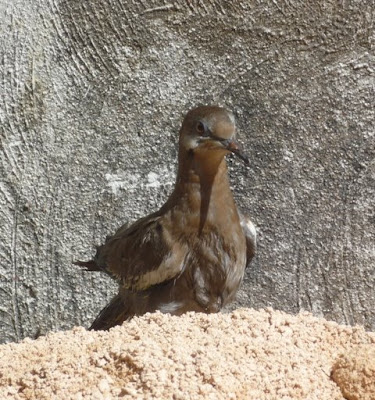 As we drive around, we see dead animals in the road. Usually iguanas, but sometimes kittens and birds. Yesterday we drove around the island and saw 5 dead iguanas and one crab, and I know if we drive around again today we will find similar numbers.

Miguel will not leave dead animals on the pavement unless there is nothing left of them, and so, we stop (and sometimes back up) so Miguel can remove the body to prevent further insult to their little bodies by the passing public. He places the bodies in the plants at the roadside, hidden from view.

It's really sad to see the number of little animals that lose their life by trying to cross the road. Sometimes we spot a live animal standing at the side of the road waiting to cross, and we hiss and wave at it to tell it to go back.

Several weeks ago Miguel came home to tell me about a dove he'd picked up on the road. It was badly hurt but still alive, and since we have cats here, he took it to his house (where his daughter lives). He put the dove in a box and gave it food and water, and left it. Miguel said the dove could not walk. I was sure it would die as birds tend to be that way, and I even tried to convince Miguel to take it to Delfino so he could euthanize it. But Miguel has a different philosophy - he doesn't believe in euthanasia, he believes in letting each animal have its life, and its death.

For the first few days I expected Miguel to tell me the bird had died. The poor thing couldn't walk, it could just lay there. But it ate and drank, and so Miguel continued to give it a chance. And one week to the day he found it, the dove started walking around its box!

The second week the dove jumped out of the box and strolled around the back garden, exercising its wings and pecking for food. And so the dove got a name - Libertad (freedom).

Last week the dove flew! However, with a broken tail, it flew like a ship without a rudder. No ability to steer, and so it flew into a wall and crashed to the ground. Apparently uninjured and thankfully the neighborhood cats did not bother it.

Miguel said Libertad will not be allowed in the front of the property again, as next time it flies into a wall it might break its neck. But Libertad can strut around the back yard, and even though a very fat cat lives there, it does not bother the bird.

We don't know what Libertad will do next. But this dove has amazed me, and I would not be surprised if it learns to fly and compensate for the missing rudder. Or maybe the tail will heal, just like the feet and then the wings. 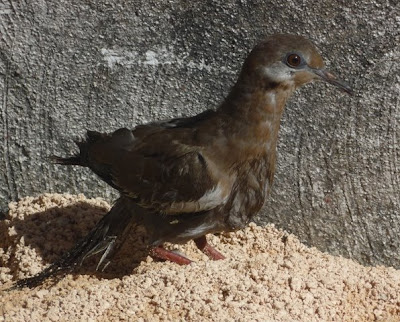 Last month everyday that I was at Sergio's I would see this little one legged bird. Maryanne would feed it little pieces of bread that she brought to the beach just for this bird.
Your psot remineded me of that.

Libertad is a very lucky little bird. I hope he gets the ultimate miracle and gets his wings again! But what a miracle that he survived. And I'm glad the bird and fat cat can live together in harmony. Saby likes to go after the little birdies in our backyard, but I don't think she'd actually harm one. She just wants to chase them out of her territory.

What a wonderful story!

I would have never thought this bird would survive. I'm glad Miguel won out on this one.

Told this story to Delfino when he came by and he suggested sending Libertad over to Isla Contoy where he/she could live in the sanctuary and not worry about getting eaten by cats. Miguel is pondering on it.