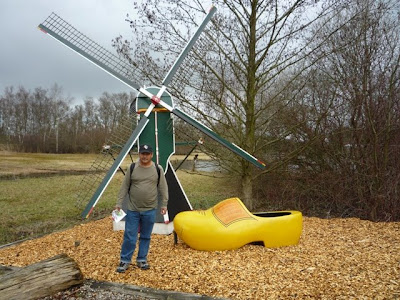 We started off our tour of Amsterdam by visiting a shoe and cheese factory. 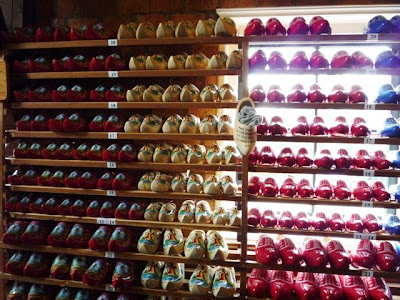 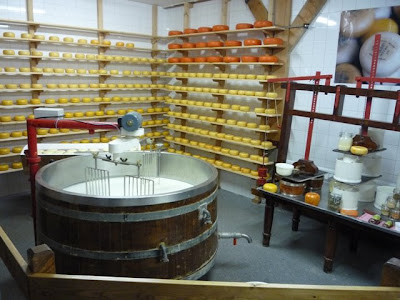 I never really figured out how those two factories came to be in the same building, but it was quite interesting. We saw a demonstration of how the shoes are made from templates with ancient machinery.

The fellow doing the demonstration was wearing wooden shoes, and as he clomped around on the wooden floor, I wondered how many people actually wear the wooden shoes any more. We didn't see anyone on the streets wearing the shoes, so maybe it is just the farmers and workers? The guy explained that the reason for the shoes was a) they are waterproof, and b) they protect the feet from injury if anything heavy falls on them. Made sense.

The factory was lined with all colors and sizes of shoes. I tried on a pair and even though my foot fit nicely inside, the shoe was hard and I sure made a lot of noise as I walked. I decided that if I ever bought a wooden shoe, I would use it for this rather than put it on my foot. 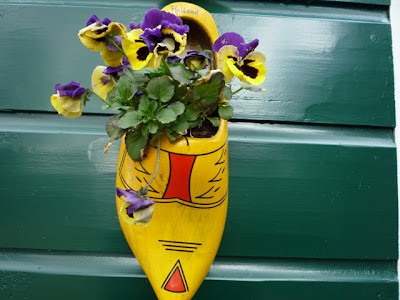 The store was selling wooden shoe keychains, and we bought a tube full to give as gifts. They are so cute.

The next part of our tour took us through farmland where we saw the canals and stopped to see a windmill. 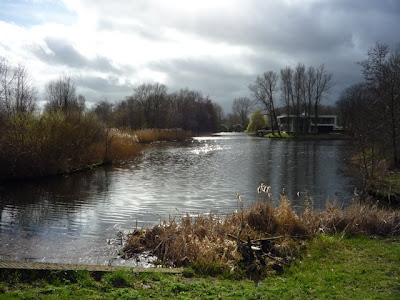 The canals freeze over in winter and they ice-skate on them. We didn't see anyone using the canals and with all the roads, I wonder how often people use the canals now. 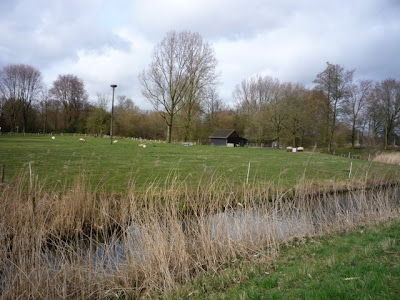 I really wanted to know more about it, and to see more, but there wasn't time on our tour.

The last part of our tour took us into the city, where the driver pointed out places of interest, including the canals... 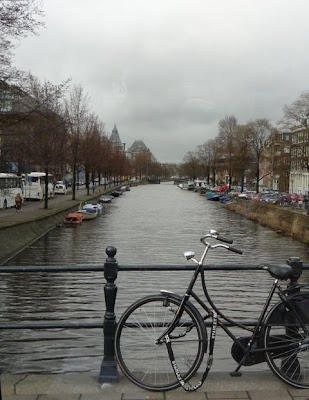 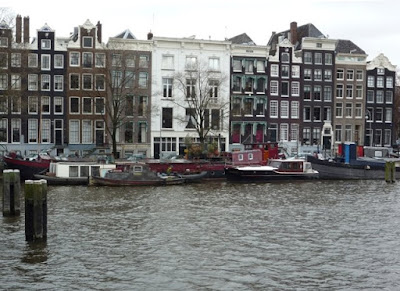 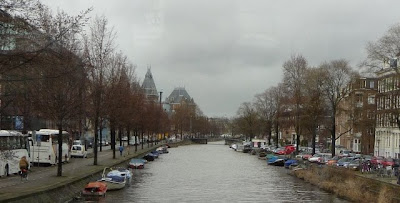 What amazed me the most was the number of people on bicycles. Thousands! People going to and from work, picking up their children from school, or just shopping. The city of Amsterdam is discouraging vehicles by charging huge sums for parking, so people are complying and using bicycles. I can imagine in the rain and snow it's a pain, but otherwise, what a great way to get around, especially when the city is designed to accommodate all the bicycle traffic. There were hundreds of bicycle stands for people to park their bikes.

Of course no tour of the city of Amsterdam would be complete without seeing the Red Light district. We were gently asked to put our cameras down as we drove through, and I understood why once I saw the girls in the windows. I did not really understand about the red light district before then, what an eye-opener! Miguel didn't 'get' it though - he thought they were models until I explained it later.

The final part of our tour was seeing a couple of famous homes - Anne Frank and supposedly the narrowest house in the world. Since only the front of that house is narrow, this house is claimed to be the real deal. Unfortunately, I can't find any pictures - I would just love to see the interior of both of these homes. I'm nosy that way.

Back at the airport, we had to go through Immigration and security. Immigration was a non-event, they just stamped our passports. Security was a little pushy and unfriendly, but we endured. We found a restaurant to get dinner, made our way to our gate, and got on our flight to Trondheim.
Posted by Sue at 7:12 AM

I love those canals! yes, they do still use them, mostly for recreation nowadays though....and they connect the whole country...one of my favorite vacation activities - "barging" on the canals of Europe on a self piloted boat! (definitely not roughing it!)

What great pictures. I was naieve when I was in Amsterdam too. Someone on the street asked if me I wanted Coke and I replied "No Thanks I'm not Thirsty". Least to say I was laughed at over that one.

I wish I'd have got to go on this tour with you. I did a self tour of Amsterdam. It was wonderful I saw a lot of what you saw.

I think the canal transportation system is something like the train system - a gentler, slower way of living. Glad they still use them for something.