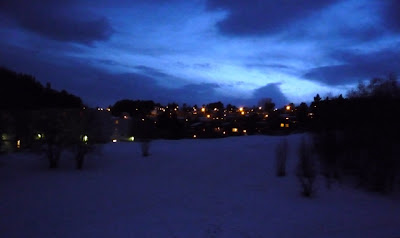 The day before we left we got some heavy snow. Because we would be leaving at 4 am the next morning, we put the big suitcase in the car the night before. Miguel got another chance to get his picture taken in the snow... 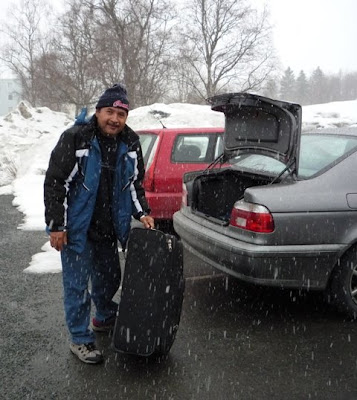 The days are very long in Trondheim. In fact, with the snow, it seemed like it never really got dark except in the middle of the night.

We had to get up at 3:30 am for our drive to the airport. Miguel didn't sleep well that night, wanting to make sure we didn't sleep in. Consequently I didn't sleep well either because he was up and down and looking out the window and watching tv and just plain restless. He was ready long before I got up at 3:30, and he fretted that I wouldn't be ready to leave on time. However, I know how long it takes me to get ready the morning of a trip, I knew I'd be ready. We were all in the car before 4.

I was dismayed to see all the new snow on the ground, I was hoping my dad's offer to drive us to the airport would not result in a problem for him with all the snow. I got more and more worried as the closer we got to the airport the heavier the snow came down - we were in a darn blizzard!

But he has good tires on his car and he got us there safely. Several times around the airport to try to find the entrance to our terminial (signs were obscured by snow), and finally we found where we needed to park. The terminal was open but the ticket agents weren't working yet; however, in good time they opened up and the line started to move.

We were in a single line that split as it got to the front, and of course we picked the wrong side. We watched many people who'd been behind us move up and get their ticket while we were stuck behind someone with a problem. Finally we got our ticket and made our way to security.

My dad wanted to get a cup of coffee and the only place to get it was behind security. He talked to security and even though he didn't have a boarding pass they allowed him to go through with us. Unfortunately, it was too early and the restaurant near security was closed. We had to walk to another part of the terminal for our gate - too far for my dad to go, so we hugged and kissed goodbye and made our way to our area. My dad said the drive home was much better, so that was a relief. Sorry he never got that cup of coffee.

But what a cup of coffee it was! Actually, it was the hot flaky danish that was so wonderful. I couldn't believe it when Miguel wouldn't have one; it was one of the best pastries I've ever had in my life. I actually went back to get another one to take with us, it was that good.

Despite the storm our flight boarded on-time, and off we went back to Amsterdam. They gave us a sandwich on the plane, and I rarely skip the meal so I ate it. It was an odd sandwich, one side was filled with a lemon cream sort of deal, and the other side was a cheese. We both went off to sleep very quickly, and before we knew it, we were in Amsterdam.
Posted by Sue at 3:25 PM

What great pictures. I can see Miguel in the snow, that's not the norm for him. Had he seen snow in Canada or some other trip before this one?

Sue, I'm enjoying the reports of your trip! Didn't realize before reading these that you had family there--makes it that much more special for you!

I still think you should have put a set of ski's on Miguel and had him do a downslope. A kodek moment!! ha. Great stories Sue!!
carl

Sue,
I have been enjoying your trip stories and the photos. Looks like you and Miguel had a good time.

love that night photo...I remember being in Holland that the sunrise started around 4 a.m. and it was still light out at 10 p.m. this time of year....since Trondheim is not far south of the Artic circle I would imagine they have nearly 24hour days in the summer, no?

Bennie - Miguel had seen snow falling but never on the ground. He was fascinated by it.

Ann - I wish my dad lived closer, especially now, but if he can't come to us, then we need to go to him. Hoping he'll be able to make the trip here though, next winter.

Carl - it would have been a Kodak moment - probably one that ended with a visit to a hospital with something broken. This is the man who broke his ankle slipping off his moped, and nearly electrocuted himself by touching high-voltage cables. I do not tempt his angels.

Jackie - thanks, we did have a good time. Sort of surprised that this old body held up with the travel and time changes. But the time change affected Miguel more than me, I guess because I can sleep anywhere, anytime.

Leslie - you're right, according to my dad they get about 2 hrs of darkness in the summer, and even then it's not really dark.