At the Amsterdam airport we had to go through Immigration to get to our gate area. They only had one line open for non-members of the European Union (EU) but it was hard to see that when one was at the back of the mass of people. We ended up standing in the wrong line, but I noticed that many others were too, so we just held our ground. Finally they started opening more lanes and switching the lanes that were open to non-EU people, so everything moved a lot faster and we got through.

We shopped at the duty-free to use up our euros. Finally it was time to board our flight to Mexico City. They had a security belt right there at the gate, and once through, we entered a departure lounge. 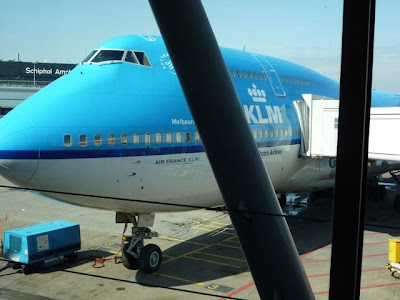 The plane was full again, and because it was daytime it was a lot busier on-board than it had been on the way down. The flight was at least an hour longer too, and because it was hard to sleep, it seemed to go on forever. We were in a row of three seats this time, so every time the girl beside me needed to get out she'd nudge me. I think she was up three times, and in between she dozed and listened to her mp3 player. She slept through the offering of the first refreshment and they had to come back and serve her. She slept through the offering of lunch, and the flight attendant came back for her and made the comment that the next time she would just let her sleep. So when they started coming near us with the hot meal near the end of the flight and she was sleeping again, I jabbed her with my elbow.

I probably jabbed her a little harder than I meant to - possibly a build-up of resentment at the times she'd nudged me to move. She jerked awake but at least she got her meal.

Several hours into the flight there was a disturbance a few rows behind us, in the middle bank of seats. Peeking back and reading body language of the flight attendants, and seeing the concern on their faces, I figured a passenger was in trouble. Soon they came over the loud-speaker looking for a doctor. Several doctors responded but by then the first one was well into diagnosing and treating the patient. The flight attendants brought out the emergency drug box and the oxygen tank. I figured the passenger probably had a heart problem - possibly chest pain or a heart attack. A few minutes later they made an announcement asking if any passengers had aspirin. I was sort of surprised that an emergency drug box wouldn't have basic aspirin.

Finally they stabilized the patient and moved her to the front behind the curtains (they must have a bed there or something, maybe for staff breaks?). Having the flight attendants tied up with the passenger meant the other attendants had to work harder to keep the passengers fed and watered. Finally they resorted to pouring glasses of drinks and leaving them on trays in the galley where passengers could just help themselves if they needed something in between the services.

I guess the passenger wasn't at risk of dying because we continued on our flight to Mexico City. When we got to immigration we saw her sitting in a wheelchair, so she was well enough for that. I hope she was fine, it must have been so scary for her and her husband to be on such a long flight and be sick like that.

The line at Immigration was not that long but it moved so slow. I resigned myself to missing our connection, but then they opened a couple more lanes and there was a chance if we rushed to the next gate.

As we made our way through the airport, we asked at the information booth where we needed to go and were directed to the gate number. Following the signs, we encountered a block, where the guard asked for our boarding passes. We didn't have boarding passes because KLM had not been able to print them in Norway. The couple in front of us had the same issue and had to fight for the right to pass so I was ready with our itinerary and the guy gave it a good look and let us pass. He also told us which gate to go to - a different one than we'd been told by information.

Weaving our way through hallways, moving walkways, and escalators, we got to a security checkpoint where they wanted to scan our bags. We were now 15 minutes away from take-off, but they insisted on going through our backpacks. They opened all our sealed duty-free bags (souvenirs) and we had to cram it all back in. They told us which was our gate (even a different number than the other two agents had told us - why couldn't anyone tell us the truth!?). We ran to the gate which was just a few feet away.

Everyone had boarded and they were about to close the door when we approached the gate agent. She wanted to see our boarding passes and wanted to know why we didn't have them. We explained and she said something about "15" and to hurry. Nobody was moving out of the way to let us board so we didn't move, and again she said something about "15". Finally Miguel figured out that they wanted us to board and sit in row 15 (they never gave us boarding passes), so he sort of pushed past the guy standing in his way. I went around to the end of the roped off area and the agent huffed at us and shouted something at me so I just stopped and said "I don't understand!".

Miguel was the one who explained it to me and so we rushed on-board and found some seats and sat down. They closed the door behind us. I couldn't believe we'd made it on the plane. We both settled down and fell asleep.

Arriving at the Cancun airport was a delight - no immigration and no customs since it was a domestic flight. We collected our suitcase, handed in our customs form, and exited the airport. Luis, our friend and taxi driver, was waiting for us. The timing indicated we would miss the Ultramar and would have to wait an hour for the next ferry. After all our hours of travel, waiting another hour was not appealing, so Luis took us to the Magana ferry instead, which tends to be a few minutes behind the Ultramar. However, we missed that ferry too but at least the next one would be in 30 minutes, not an hour.

We arrived home to be greeted by Charlotte and Jim, who had kindly stayed at the house and took care of everything while we were gone. It was so good to get away and know we were leaving things in good hands. And it was good to be home.
Posted by Sue at 7:30 PM

I have so enjoyed these posts on your trip to Norway. It's somewhere I will probably never get to but it is so interesting. I've loved them all and just wanted to let you know.

What a great adventure! But I'm sure you were so happy to be back home!

Jonna - thanks! Glad you enjoyed the posts. I have loved reading your blog, glad I could reciprocate.

Ann - yes, it is always good to get home, isn't it? The animals were happy to see us, I think.

Wow what a trip home. I'd have wanted to kiss the ground to be home from the sound of it.

If you were on a 747 I know they have staff areas where they can go lay down and sleep. I bet that's where they took that passenger.

Good thing you had Miguel in Mexico City. I would have never guessed they'd let you through the security without a boarding pass.

I'm glad you shared your trip with us...

I have really enjoyed taking this trip with you Sue. Thanks for bringing us along.