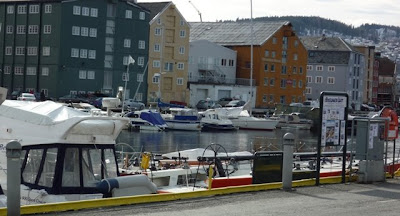 Trondheim is a modern port city with a population of just under 170,000 people. My father, a Canadian by birth, an American by profession, and a Norwegian by marriage, has lived with his Norwegian wife in Trondheim for the last 15 years or so (since his retirement from the work force).

In the late 1960's we lived in the tiny village of Lillesand, population of about 1000. While our house was being built we lived in this hotel - quite a nice place, right on the sea. I know we have lots of pictures from there, but none of them digital or where I can get my hands on them. It was a very pretty town though, and a wonderful place for a child with an imagination to play.

So more than 40 years later, I wasn't sure what to expect in Trondheim. I'd heard stories and seen pictures from my father's collection, but I still only had Lillesand, with its hills and fjords, as my point of reference. Surprisingly, Trondheim looked a lot like Lillesand - picturesque and colorful wooden houses and fishing boats. 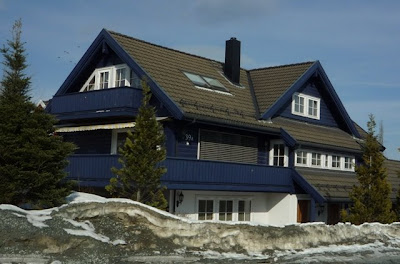 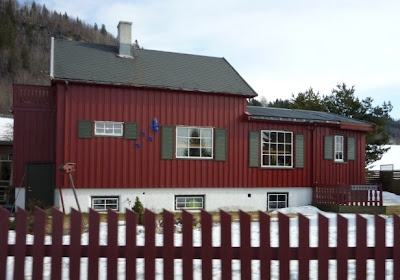 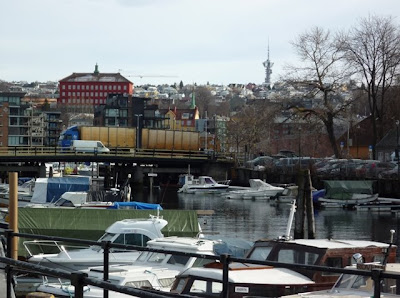 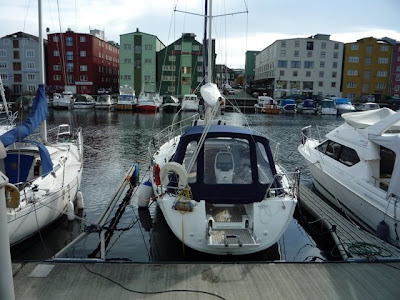 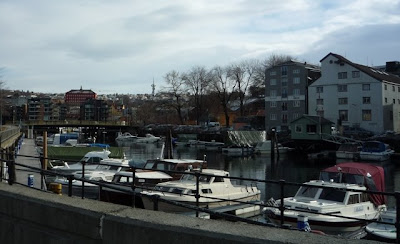 But where Lillesand was a tiny village, Trondheim is a modern city. We were eager for my father to take us for a drive. But time for that another day, today would be the day to visit with family. We hadn't seen Dad and Else in two years, and we had a lot of catching up to do.

When we arrived at their condo, I was touched to see one area of the counter loaded with Mexican fixings for meals. And the fridge held more treasures. We would not suffer for lack of our favorite things to eat, that's for sure.

Miguel tells people about my dad's second fridge - the balcony outside the living room, where he stores his things that he wants to keep cold. Things like beer, wine, soft drinks. It was cold enough to keep everything cold, but not so cold that it froze. My dad's fridge worked out just fine for the two men.

Miguel standing in my dad's 'fridge' 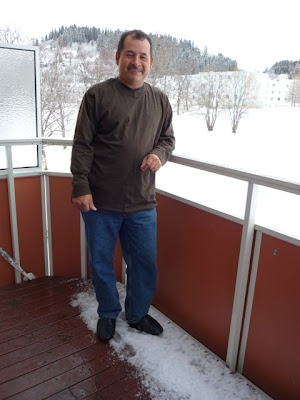 Awesome pics Sue. Is this the 1st time Miguel has been in cold and snow?
carl

Miguel has been in cold before (he worked in Mexico City and northen Mexico, and of course, he grew up in the mountains (but they never got snow). So this was his first time to put his feet in it, he made me take tons of pictures of him standing in it here and there - some will be posted.

Too funny.. I Love that 2nd Fridge Miguel is standing in.