Ok, life is getting back to 'normal' (school is finished until next week, the guest suite is empty, the animals are healthy) so it's time to get on with the pictures and details of our trip to Norway.

We flew KLM airlines. The flight from Mexico City to Amsterdam was long - 9 or 10 hours, sort of can't remember now. Total travel time was 25 hrs, much longer than the travel I'm used to doing. What to take in carry-on?

I thought we might go hungry. I bought chips, cookies, water, nuts to take onboard. KLM fed us two full meals during our flight - dinner and breakfast, and in between they plied us with refreshments and snacks. We were stuffed and never opened our snacks.

I thought we might be bored. I took books and mp3 players. We didn't need anything, we slept except when we were eating/drinking.

And we tried not to watch the 'show' by the couple in the seats in front of us. There was a large gap between their seats, and they spent most of our waking hours licking and fondling and smooching and french-kissing each other. I don't mind shows of affection, but this was actually quite revolting. Along with the fact that the guy was sick - not sure from what but the flight attendant suggested he refrain from alcohol and just drink juice until he was feeling better. I was sure we'd catch whatever he had, but maybe his girlfriend lapped up all the germs. Yes, they were lapping at each other's faces. Ewwwww!

We had another flight attendant issue where we were the forgotten ones. I was admiring how our flight attendant was handling the passengers, including the sick one in front of us, and being so nice and chatty with everyone as she handed out dinner trays. She repeated the selections over and over to each and every person and never seemed to get impatient. We politely told her our choices, and she handed them to us. And then she pushed the cart along to the next rows. Oops, she 'forgot' our dinner rolls. I was not about to skip the dinner roll, there was a nice pat of butter sitting on my tray just waiting for a hot bun to soak it up. And I correctly guessed that the roll might be my favorite part of the meal, except for the dessert.

Unlike the attendants on the flight from Cancun to Mexico City, we succeeded in catching her eye and asked about the rolls. She was not happy about it, told us to wait and she would get to us. Eventually she did, but really - what is it about flight attendants that they cannot be consistent with what they serve and how they serve it? I feel like they sometimes play favorites. We were just two quiet, polite people sitting in our seats, with our seat belts fastened, our chairs in their upright position (out of courtesy for the people behind us), and our carry-ons stowed underneath the seats in front of us. Model passengers, if you ask me. We never asked for anything other than when it was offered, we were no trouble at all, unlike some people. So why was she annoyed with us for reminding her about our dinner rolls?

Meal consumed, if not really enjoyed, it was time to sleep. I have no problem sleeping on planes. I can even sleep in airports while sitting in the chair at my gate. And so I slept. I thought Miguel slept too but a couple of times when I woke up to change position, I saw that he was sipping away at a coffee, or drinking a refreshment. I guess I missed the cart on those passes, but he didn't.

Finally we arrived in Amsterdam, where we would have a 6 hr layover. I was surprised that we just got off the plane and did not go through immigration or customs; we were free to go to our next gate or just wander around. 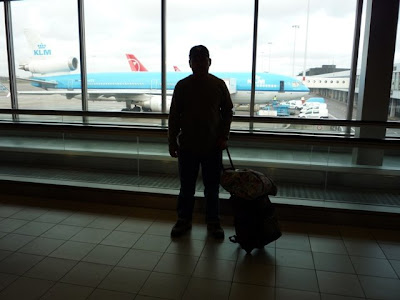 First we changed money, and then we found a booth that offered tours of the city. We were lucky that one tour fit right into our layover, and that another couple that had flown from Mexico City too were also interested (they needed a minimum of 4 people to do the tour). They called Immigration to let them know we would be going out, and letting them know what country our passports were from, and everything was arranged. We were led out of the airport area by our guide, passing through Immigration without doing anything other than showing them our passports. So easy.

Our guide did not speak Spanish, so he conducted the tour in English. Good for me, not so good for the other couple as they did not speak or understand English. Miguel speaks and understands about 50%, but throw in a Dutch accent and his understanding rate goes down. There was some sort of flip chart where the guide flipped to a number and that number corresponded with a Spanish printout telling the guests what the guide was talking about. A lot got lost in translation, but everyone kept nodding their head so I guess they were ok with the process (Mexicans can be so tolerant and polite).

Our first stop on the tour would be to a wooden shoe factory. To be continued...
Posted by Sue at 7:10 PM

I'm glad to see you started back on the Norway stories before you forget them.

It sounds like you were model passengers to me. It's a shame they made you feel that way. I think the foreign carriers generally give better service than the US carriers.

alllll-righty!!! THIS is what i've been waiting for.ha. I got the popcorn,

Bennie - KLM gave great service. The first incident was on Aero Mexico. The attendent on KLM was great other than the roll incident, and we continued to have excellent service on all the rest of our flights with them.

Carl - sorry it took so long, you know how life can get in the way. :-) Just posted a bunch, and will keep going. Hope you enjoy!