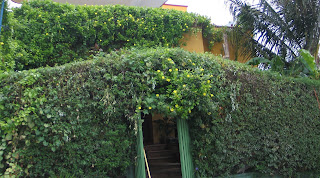 A few years ago we planted some small salvia hedglings. I'm not sure if 'hedglings' is even a word however I did a search and someone else wrote a blog about their hedglings, so I'm going with it - it means small hedge plants, in my mind. I think the Mexicans have a great idea - they add 'ito' or 'ita' on the end of words to indicate a little version of what they're talking about - be it person (Miguelito), place (casita), or thing (gatita).

Anyway, the idea of the hedge was to create a living wall - a barrier from the street, offering privacy, security, and shade. A wall that would let in the breezes, and would not generate more heat like a concrete wall would do. A wall of beauty and life, where small lizards could eat and play.

In the center of the row of hedge is a wooden gate - the normal port of entry into the property. With the gate locked, the theory was that no person or animal could come in, or get out. Ha!

When Loco first arrived on the scene as a stray (after Hurricane Emily), we tried to encourage him to go find his home. For a week as we came or went we quickly closed the gate to keep him out. Loco quickly learned that he could squeeze under the gate, and happily claimed the front terrace as his home. Defeated, we adopted Loco.

Next was the brown dog down the road. That dog made holes in the hedge so he could come in and eat Loco's food, and drink his water. Then Jimmy (the abandoned dog from down the road), joined in, and he not only ate and drank, he dug up the garden. We put chicken wire in the hedge to shut out the dogs - they just chewed on it until they made another hole.

One night Miguel stayed out late. I locked the gate, as was our custom, and went to bed. In the morning I found Miguel in the hammock on the front terrace. He didn't have his keys and climbed through one of Jimmy's holes in the hedge. So much for thinking we were keeping out humans. Obviously, the hedge was meant to discourage, not prevent.

Jimmy died this spring - not sure what caused his death, but we think he ate something bad out there in the streets. Without Jimmy's constant attempts at breaking out, our hedge is now solid and keeping out the other dogs. We do get stray cats come to visit - they seem to come in under the gate. And Loco still goes under the gate when he wants to escape. He has to wiggle and maneuver because he's bigger and chunkier now, but he can still get out if he's determined enough.

Funny Sue! We had a fence in our backyard in Washington State that was put up to keep the dog in and the deer out. Before the fence, the deer would wander in and trim all the plants to the nub. Anyway, the last five years we lived there, I started noticing huge holes in the backyard ivy. I finally was on the deck one afternoon and discovered it was a mountain beaver that had tunneled in under the fence. Craig took extraordinary means to block his tunnels and new digging, so then the beaver (duh!) started just eating holes in the wood fence. I wish I had a picture of it because it was pretty funny. And, of course, the beaver ate all the vegetation that masked the holes in the fence. Sometimes you just have to go with the flow! :)

P.S. The front hedge and entrance are beautiful! R and I rode bikes out there in 2005 (you've probably heard that story) so he could show me where you lived. You and Miguel have turned the casa into a work of art!

I love this post. I guess it's because I've known you through all these past events you discussed. Poor Miguel needs to be sure and keep his keys from now on... I just roared when I read that he had to crawl through himself.

Good to see that at least one "hedge fund" has survived this recession!

Beck - I agree, sometimes you just have to go with the flow, you can spend too much energy trying to fight it and seems the animals get their way in the end anyway. And I take little credit for the garden - Miguel does all the work and I just admire. We are both bad though when it comes to new plants - we can never pass by a group of plants for sale without checking to see if there's anything there we don't have that we'd like to have. We've bought petunias quite a few times, something about our location - they just don't make it.

Bennie - I figure you'd relate to this, having spent time here you know most of the cast of characters. Including Miguel! :-)

Scott - that hedge was a mess of dead-looking brush after Wilma, but it came back and now it is quite dense. Wish I could say that my other 'hedge' fund came back too after the mess with the markets. Time will tell, I guess.